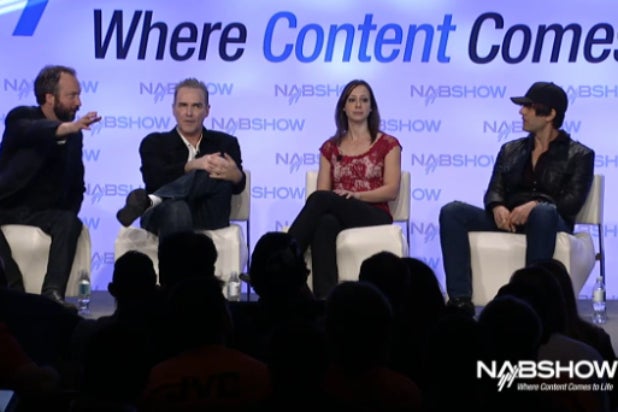 Tom Green, Criss Angel and Norm MacDonald talked about the importance of monetizing their web exploits at the “Broadcasts Minds” panel at the NAB Show in Las Vegas on Wednesday morning.

The panelists also plugged the NewTek’s TriCaster product during the session, which happened to be presented by NewTek. Each panelist has built their own TV studios around different versions of the NewTek product.

But technology is not king, as many panelists have shared over the course of the 2014 NAB show — that title still belongs to content. The panel, which also included Cali Lewis, stressed the need to know your audience.

MacDonald recounted a story the late Richard Pryor told him well before any of this webcasting opportunity existed. Pryor told the former “SNL” star that only one in 10 people know who he is, and that only one in 100 like him. That still added up to millions of people, a theory that MacDonald applies to current online projects.

In other words, don’t be something for everybody, be everything for some people and a market will be discovered.

Lewis suggested that people not treat this new environment like a new business  but follow the same model as classic industries.

She believed that people make the mistake of being too worried about annoying social media followers. She also stressed counting engagement levels over follower numbers, because followers can quite literally be bought.

Angel negotiates commercial time into his specials out of the conviction that you need far more impressions today to be remembered. The magician said his “Believe” special, which had such a 30-second slot, help boost ticket sales for the Las Vegas show of the same name rose 30 percent in the fourth quarter of 2013.