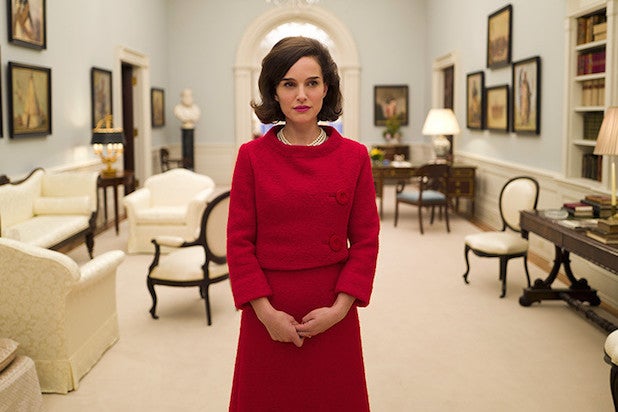 “Jackie,” the drama about Jacqueline Kennedy starring Natalie Portman and directed by Pablo Larrain, has been added to the Toronto International Film Festival lineup as part of the Platform section, TJIFF organizers announced on Thursday.

This gives the Chilean director Larrain two films at Toronto this year. His drama “Neruda,” which premiered in Cannes, was previously announced as part of the Special Presentations program.

Other films in Platform include Kiyoshi Kurosawa’s “Daguerrotype,” a French-language supernatural fantasy from the Japanese director; “Lady Macbeth,” a 19th century drama from British director William Oldroyd; “Moonlight,” directed by Barry Jenkins and starring Emmy nominee Mahershala Ali (“House of Cards”) in a story of male sexuality; “Nocturama,” Bertrand Bonello’s film about young radical terrorists in Paris; and “Hema Hema: Sing Me a Song While I Wait,” a film about a mysterious jungle ritual from Bhutanese lama and filmmaker Khyentse Norbu.

“Nocturama” will serve as the program’s opening-night film. “Daguerrotype” was previously announced as part of the festival’s Special Presentations, but has been shifted to Platform.

The Platform section was introduced last year at TIFF, and was created to “champion directors’ cinema from around the world,” according to a festival release. “The lineup this year aims to shine the spotlight on fearless, artistic films that will inspire a global dialogue around issues that affect us all,” said TIFF Director and CEO Piers Handling in a statement.

Added artistic director Cameron Bailey, “This year’s group of bold and brilliant filmmakers brought forth narratives that are provocative, personal, and will challenge conventional forms of expression and redefine the art of storytelling.”

The three-person Platform Jury, which is yet to be announced, will give a $25,000 (Canadian) prize to the section’s best film. Last year, Alan Zweig’s “Hurt” won the award.

The Toronto International Film Festival will open on Sept. 8 with “The Magnificent Seven” and run though September 18.

Additional programs will be announced in the coming weeks.