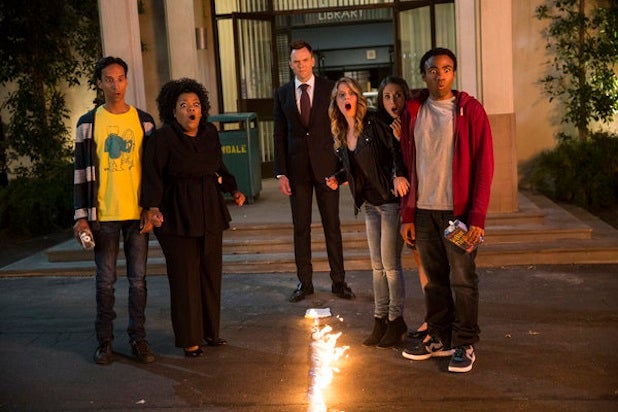 The fifth season of NBC’s “Community” wouldn’t be properly previewed without acknowledging the return of its creator Dan Harmon.

“While there were great episodes last year and there was a great imitation, an appropriate homage to ‘Community,’ there was something missing and we didn’t realize it was Dan and subsequently [returning executive producer/writer] Chris McKenna,” Jim Rash, who plays Dean Pelton, told TheWrap.

Fired ahead of Season 4, Harmon’s absence was clear to both fans and critics.

To be fair, last season’s showrunners, Moses Port and David Guarascio, were tapped to deliver the series to its fifth season and thus more opportunities for syndication. And they should be applauded for doing just that.

But, in achieving their goal of a season renewal, they adhered to a much more traditional sitcom storytelling style than Harmon and relied less on past history between characters – presumably to make the comedy more accessible to new viewers.

That’s all behind the series now. With Harmon back in charge, many of the things we loved about the show are also back starting with the appropriately titled “Repilot” episode.

So, what does Harmon’s return mean for fans? TheWrap posed the question to “Community’s” stars during a recent visit to the set.

1. The reset button was pushed. “There’s a little bit of a reset for sure with all of us,” Danny Pudi, who plays Abed, told TheWrap. “I think that’s inevitable with Dan and Chris coming back. We’re looking back on where everybody’s at and starting over, thinking what have we been dealing with.”

2. Better writing. “These scripts are some of the best we’ve ever done,” said Joel McHale, who plays Jeff. “I think Dan’s innovation is through the roof. It comes out of Dan’s brain, and that’s what the show is.”

“Dan’s tone is so specific,” Ken Jeong, who plays Chang, said. “He created Greendale. He created ‘Community.’ The specificity of his writing in general surprises me.”

3. Epic episodes have character payoffs. “The great thing about the way that Dan writes these episodes with the writing team, with Chris McKenna as well, that any time something huge and epic is happening it’s because of a big change that the characters are going through,” Alison Brie, who plays Annie, said.

“The scale of these episodes are classic Dan, and the character development is classic Dan,” said Rash. “Nestled between insanity is a love for these people.”

4. Characters’ histories once again play a big role. “The understanding of who these people are to each other is back,” Yvette Nicole Brown, who plays Shirley, told TheWrap. “When Shirley’s character says things to other characters, and this is true for all the characters, it makes sense. It’s like, ‘Oh, they had this issue.’ All of the inter-webbing that keeps these people together is back.”

“Community” returns for its fifth season with back-to-back episodes on Thursday at 8/7c on NBC.