It’s at times like this that I wish I still had a job covering television on a regular basis for a newspaper, or really for anyone.

This NBC late-night implosion is nearly as hot and juicy and fun as it was predictable. Yes, predictable, boys and girls. I predicted this "Tonight Show" 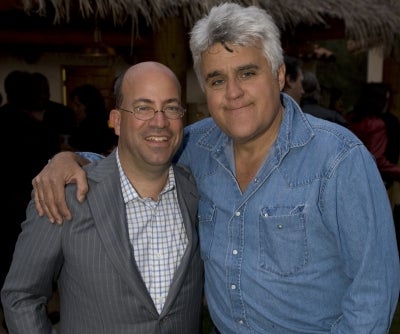 transition thing wasn’t going to fly repeatedly over the past several years. You can look it up.

But not even I could have foreseen just how massively self-destructive, incompetent and lily-livered NBC was going to prove to be.

Amazingly, Jeff "Mother" Zucker and his minions have done absolutely not a single thing right in this whole mess, going back to 2004 when they basically transformed a guy who was handily winning the late-night wars (that would be Jay Leno) into a five-year lame duck with Conan O’Brien peering over his shoulder.

The first shock was that Leno would go along with being put out to pasture so slowly and pathetically, like a guy standing on the tracks waiting for a train traveling at 12 mph to run him down.

The second was that Leno would so relate to his abusers that he’d make the suicidal move of agreeing to a 10 p.m. show rather than take his somehow still-popular act on the road to a competitor. We might see this as the closest thing showbiz has to Stockholm Syndrome. (Burbank Disorder?)

That Leno has no balls or self-respect is a given. He was NBC’s tackling dummy, yet jumped back into the pile for more.

But it was even more of a travesty for NBC and Conan to bring Jay back for the 10 o’clock monstrosity.

To NBC, it was a case of having so little confidence in Conan that it refused to risk having Jay go to a competitor. So there went the courage of its convictions. Conan was toast before he ever delivered his first monologue. Had Zucker had the option to bag the Conan deal on the eve of its kicking in, it’s clear that he would have.

Then there’s Conan himself. He was brought in with the knowledge that the previous inhabitant of his new home was still living out back in the guest house, waiting to move back in at the first opportunity. No, actually it was worse than that. It was like having your wife’s last boyfriend, the one she spent five years breaking up with, moving in across the street and smiling at you every night. Speaking of doomed to failure.

Zucker is fortunate that O’Brien’s contract appears to have no stipulation that he won’t host a "Tonight Show" that’s moved to 12:05 a.m. That made his savvy but toothless Tuesday memo evidently obsolete. And it spells his demise a mere seven months into this never-consummated marriage. He’ll no doubt be going to Fox, and he and Jay and Dave and Jimmy can now all live warily ever after.

That Zucker and NBC programming chief Jeff Gaspin couldn’t, or wouldn’t, stand up to the network’s mutinous station affiliates may be the most shameful part of all. The right thing would have been to call their bluff and allow them to walk if need be.

But that would have required a network that can’t see an inch past its nose to take the long view. There’s precious little danger of that for a company whose moniker has come to stand for Never Behind Conan.

An entertainment journalist since 1984, Ray Richmond has served variously as a television reporter, critic and columnist for Daily Variety, the Hollywood Reporter, the L.A. Daily News, the Orange County Register and the late Los Angeles Herald Examiner. He is also the author of four books, including the bestselling "The Simpsons: A Complete Guide to Our Favorite Family." When not writing, he can often be found hustling quarters as a street mime in Spokane, Washington. Email: tvrayz@aol.com. He also regularly blogs at www.manbitestinseltown.com.