NBC News’ Shaquille Brewster had to toss back to Craig Melvin when a seemingly angry person accosted him in the field while he reported on Hurricane Ida.

Brewster was doing a live shot in Mississippi and was in the middle of telling MSNBC viewers that the return of postal services after the devastating storm was a good sign when a man got out of his vehicle and approached. Brewster reoriented the shot, moving away from the man, but just before Melvin took back over from the studio, the man was seen getting in the correspondent’s face.

It was hard to hear what the man was saying, but he seemed to be yelling, “Report it accurately!” 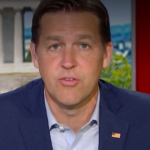 A visibly alarmed Melvin said, “We’re going to check in with Shaq Brewster just to make sure all is well. There is a lot of crazy out there.” Later, Melvin told viewers that Brewster was, in fact, okay: “You probably saw or heard a few moments ago one of our correspondents was disrupted by some wacky guy during his live shot there in Mississippi. Pleased to report that Shaquille Brewster is just fine. Shaq is okay.”

A representative for MSNBC did not immediately return a request for comment on what happened to the man.

Brewster also tweeted to let viewers know he was unharmed, saying, “Appreciate the concern guys. The team and I are all good!”