NBC has picked up comedies "Community" and "Parks and Recreation" as well as the hourlong drama "Mercy," the network said Friday.

Angela Bromstad, president of primetime entertainment at NBC and Universal Media Studios, said each series had received a back-nine order. 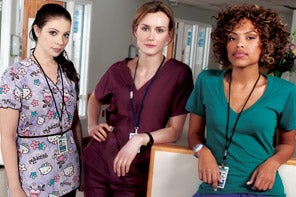 Bromstad said the network is "pleased with the critical and audience reaction" to "Community," and praised "Parks and Recreation" as a "steady performer."

Of medical drama "Mercy," she said, “This drama has found a dedicated audience and continues to build in the ratings. We’ve seen future episodes and we’re confident ‘Mercy’ can be a strong player for us."

"Mercy" has averaged a 2.1 rating, 5 share in adults 18-49 and 7.8 million viewers overall for the season, and has improved the network’s timeslot average in 18-49 31 percent from last season. It also has finished No. 1 in its timeslot in total viewers for its last three airings, NBC said.

“Parks and Recreation,” from Greg Daniels and Michael Schur, is a production of Deedle-Dee Productions and Universal Media Studios.