Finally, NBC’s coverage of the yawn-fest that was the Olympics paid off, big-time.

Normally my disdain for watching hockey is overshadowed by my husband’s love affair with it. He’s more than just a watcher; before his knee surgeries, he was an avid player. And he covered it for the New York Times.

Even when living in the dust bowl of Tucson, Arizona, he found a way to play. He would drive two hours to Phoenix just to breathe Zamboni fumes.

To me, every hockey game looks the same. Guys skating back and forth, chasing a puck. Pass me a seltzer, please, and leave me out of the replays.

NBC’s coverage of Sunday’s Olympic gold medal hockey game, featuring the U.S. against Canada, may have been short of a miracle, but it was a heart-stopping spectacle that even non-rabid fans could appreciate. 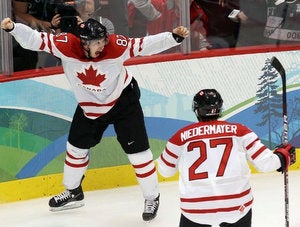 The well-toned bunch of pro athletes may have lacked the straggly youth of that miraculous 1980 Olympic team, but still we hoped. After all, these were top players, well-paid, well-protected and pumped to win that gold … ornament. Who wasn’t hoping for another 1980 moment of pure joy and optimism?

Not much has changed since those tumultuous times of lining up for gas, Afghanistan’s wars and political backstabbing, despite our new president’s attempts to restore our country’s once-eternal optimism.

Back to NBC’s Olympics. So we were all prepped for another win. Maybe not against those scary Russians and their expressively scary eyebrows, but a win is still a win. Even when sweet and gentle Canadians are the new “enemy” … on the ice, at least.

Team USA almost pulled it out of the hat, but fate handed the gold to our northern neighbors.

Sure, it was a letdown, but we couldn’t have lost to a better and nicer team.

Our hearts wanted another miraculous sweep, but we would have to settle for second best. Not too shabby, but not the top spot.

NBC finally got something right, televising the game in actual reality rather than another time dimension. We cheered, we hoped, we passed the chips as Sidney Crosby (above left) passed the puck. And our hopes were crushed in overtime.

But no matter: It was an amazing game that left even this hockey loather wishing for a different ending.

So we did what any proud American would do after watching this heart-in-throat game.