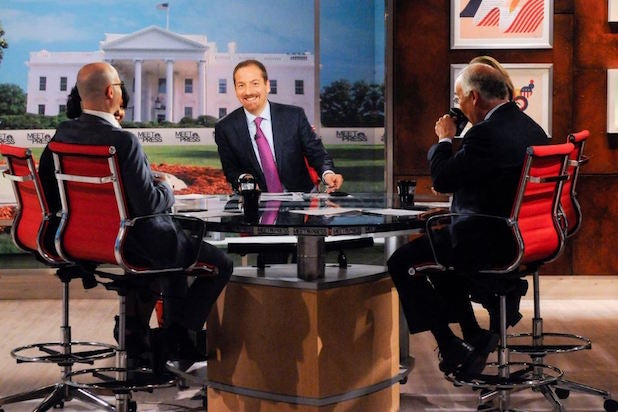 NBC’s “Meet the Press,” the longest-running show on television, turns 70 this Sunday and the broadcast will feature special anniversary graphics, a special opening tracked by actor Dennis Haysbert and a flashback segment dedicated to the anniversary.

“Our 70th anniversary gives us a chance to celebrate our rich history, while also recording history in what is already proving to be a dynamic, news-making year,” executive producer John Reiss told TheWrap.

An old friend to viewers, former “MTP” moderator Tom Brokaw, who is celebrating his 50th year at NBC News, will join current moderator Chuck Todd during the program to celebrate the duel anniversaries.

When “Meet the Press” debuted in 1947, television as a medium was still in its early stages. The mere fact that a show from that era is still thriving is an enormous achievement. “The Simpsons” is often credited for it’s longevity, but it premiered 42 years after “MTP.”

The first guest back in 1947 was James A. Farley, former Postmaster General and Democratic National Committee chairman and campaign manager to Franklin Delano Roosevelt. Martha Rountree then filled the moderator role currently occupied by Todd. There have been 12 moderators during the show’s 70-year run, and they have interviewed every president since John F. Kennedy.

To celebrate the milestone, “MTP” will produce live events throughout the year, starting with an event from the SXSW conference in Austin, Texas. The anniversary will be recognized on all “MTP” platforms, including Chuck’s MSNBC “MTP Daily” show, “1947: The Meet The Press Podcast” and also through the show’s digital mediums.

The @MeetThePress Twitter account will tweet flashbacks of guests or news from the show on that day in the past, while a Facebook feature called “Class of 1947” will detail stories and observations from those born the year when the program launched. (One of the people born that year happens to be Todd’s mother).

“MTP” might be old, but it’s certainly not stale. The show beat rivals “Face the Nation” and “This Week” in both total viewers and the key demo of adults age 25-54 last Sunday by averaging 4.5 million viewers and finished 2016 as the most-watched Sunday public affairs show among the demo.