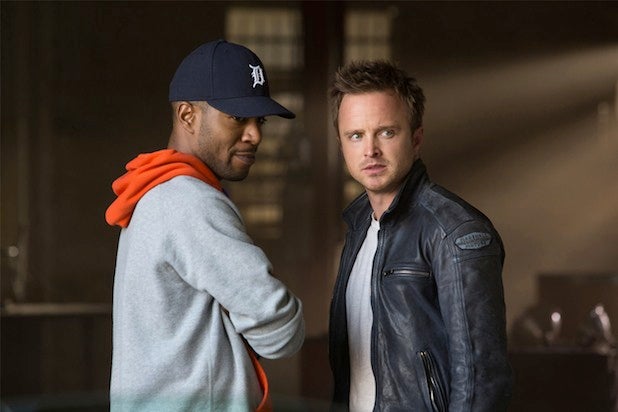 Aaron Paul is still riding high from “Breaking Bad,” but the reviews for “Need for Speed” suggest his star will fall if he doesn’t pick better movies to star in.

The Disney release, starring Paul as a talented drag racer out for revenge on an old acquaintance (Dominic Cooper) who framed him for manslaughter, has been declared “rotten” by a large majority of critics aggregated on Rotten Tomatoes. Out of 60 reviews counted so far, only 14 were positive — and even those weren’t that kind.

“Car fetishists will undoubtedly enjoy the many loving shots of some of the world’s most expensive automobiles, but they’re about the only demographic that’s going to come away from ‘Need for Speed’ satisfied,” Duralde wrote in his review. “The racing scenes are uninspired, screenwriter George Gatins’ dialogue is flat and the performances are forgettable.”

Entertainment Weekly critic Keith Staskiewicz agreed, noting the PG-13 action flick joins a long line of big screen duds that began as something fun to play on the small screen.

“While the movie is flashy and might give some adrenaline junkies a fix, there’s almost nothing under the hood. The story is tired, the dialogue’s an assemblage of clichés, and even the action sequences, which lack the pop and imagination of other recent revved-up joyrides like ‘Fast & Furious 6,’ feel as if they’re from another era,” Staskiewicz wrote. “Beneath all that chrome plating, this vehicle is a well-used car. ‘Need for Speed’ is just another pileup in Hollywood’s long accident report of taking games from the couch to the theater seat.”

The Washington Post‘s Jen Chaney says “that’s one way to describe it,” but it’s actually so much more — none of it being good, in her eyes, either.

“‘Need for Speed’ is also: a video game adapted to a bloated motion picture that’s designed to sell more video games; an excessively long commercial for the Ford Mustang; a blatant bid to kick-start another lucrative franchise in the same rubber-burning spirit as the “Fast & Furious” series; absolute proof that Aaron Paul, this film’s star, should think more carefully about his post-‘Breaking Bad’ career choices,” Chaney wrote.

The good news for Paul is that no one is blaming him for this movie’s failure to deliver anything more than cheap thrills and cool cars. On the flip side, not many are offering much praise for his performance.

But at least critics, like Newsday critic Rafer Guzmán, are too distracted by the rest of the movie’s shortcomings to pick apart the rising star’s acting.

“Even for a low-aiming youth movie adapted from a storyless video game, this is a remarkably dopey plot. Director Scott Waugh (‘Act of Valor’) doesn’t even bother hiding it. The physics-ignorant stunts, many involving aircraft, are too improbable to work as fantasies or even as gags, and Tobey and his crew frequently cross the line from daring to dunderheaded,” Guzmán wrote. “You might forgive them clipping the occasional bicyclist and plowing into oncoming traffic, but playing dodge-‘em with a bus full of schoolchildren is another matter.”

There were a minority of those who could toss the imperfections aside, and enjoy the ride as stuntman-turned-director Waugh intended. Associated Press critic Jessica Herndon was enamored by the “thrilling stunts and races,” while Chicago Reader‘s Ben Sachs declared the film “easy to enjoy.”

“The action is clearly delineated, the neon colors bright as can be, the characters deliberately archetypal,” Sachs wrote. “Unfortunately there’s not much of a sensibility beneath the pleasant surfaces; the movie is easy to enjoy, but just as easy to forget.”