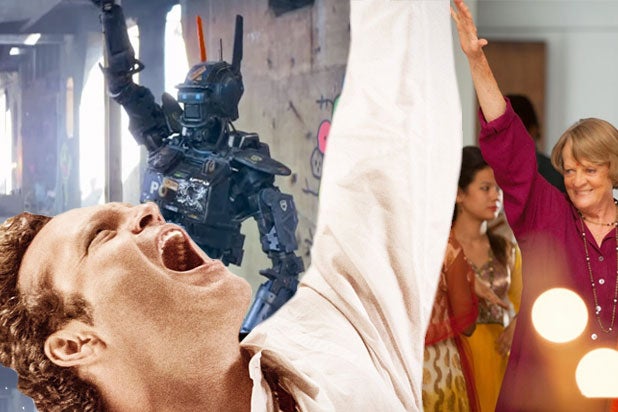 Neill Blomkamp’s new sci-fi movie “Chappie” opens Friday as the favorite to knock off the reigning No. 1 film,  Will Smith caper comedy “Focus” and top what looks like a slow weekend at the box office.

The Sony Pictures release will come in with a little more than $15 million and beat out the weekend’s other two openers, say the analysts. The Vince Vaughn comedy “Unfinished Business” from Twentieth Century Fox will finish in the $10 million range and “The Second Best Exotic Marigold Hotel” from Fox Searchlight should trail that.

The R-rated “Chappie” is a something of a wild card. Original sci-fi movies — the specialty of Blomkamp, who wrote and directed “District 9” and “Eylsium” as well as “Chappie” — are among the most volatile genres at the box office.

Despite hits like Christopher Nolan’s “Interstellar” and “Inception” and the top-grossing film of all time “Avatar,” there have been many more recent misses. Lana and Andy Wachowski’s “Jupiter Ascending,” “After Earth,” Guillermo del Toro’s “Pacific Rim” and Tom Cruise’s “Oblivion” all came up short domestically.

With a $49 million production budget, “Chappie” cost about half of what those films did, so it will have an easier path to profitability. It stars Hugh Jackman and deals with a robot (voiced by Sharlto Copley) that is captured by criminals, and the film has its share of laughs.

The critics have yet to weigh in, but it is ahead of where Blomkamp’s last film “Elysium” was on Twitter, though trailing it on Facebook. That one starred Matt Damon and opened to $29 million in August 2013 and topped out at $93 million domestically.

“Elysium” took in $193 million overseas, where the South African director has a strong following, and that’s where “Chappie” should make most of its money. It opens in roughly 40 mainly smaller foreign markets this weekend as well and roughly 3,000 theaters domestically.

With “Unfinished Business,” Vaughn will be trying to break a recent box-office losing streak. His last hit was 2009’s “Couples Retreat,” and misfires “The Internship,” “The Watch” and “The Dilemma” have come since.
Dave Franco and Tom Wilkinson co-star in the R-rated tale of a European business trip gone that goes very wrong.

Fox had a hit last summer with a somewhat similar comedy, “Let’s Be Cops.” But that one skewed younger and cost less to make than “Unfinished Business,” which has a $35 million production budget and was financed by New Regency.

There are no reviews and its social media footprint is not significant. It will be in roughly 2,800 theaters.

“The Second Best Exotic Marigold Hotel” has a tough act to follow, but Fox Searchlight will be happy if it does anywhere near as well as the original. That one was a breakout hit in 2012, taking in $136 million at the worldwide box office on a $10 million production budget.

It will be in just 1,400 theaters which, along with the fact that it’s target audience of mature moviegoers tends not to rush out for openings, puts a cap on its debut.