It’s the morning after the day of the long knives at Variety, Part II, and I find myself thinking about the interview publisher Neil Stiles’ gave TheWrap yesterday, and another that editor Tim Gray gave TheWrap last week. 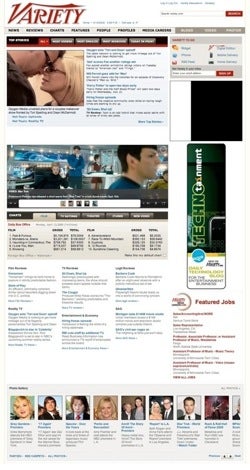 Here’s the takeaway: Stiles has no plan for staunching the flow of revenue out of the newsprint product. He has no specific direction in mind for the identity of the online site (which by the way, launched a new design today — pictured at left — and had a whole world of trouble, but such is the way of the web). And he has given up on monetizing the site, except for a vague plan to charge for unidentified non-news content.

He rejects the notion of reaching out to new media, and meanwhile has his reporters out on the town, grilling executives for ideas around what kind of information or services they might be willing to pay for.

Variety, which for decades has been coddled by absurd profit margins, has no clue about how it’s going to survive.

Stiles says the trade is still “an extremely profitable franchise.” If so, why are they cutting into bone? The cuts in January were close to 7 percent, and yesterday’s elimination of 15 more bodies continues the trend.

Variety has been abandoned by studio advertising. But instead of turning to the web, like almost every other print-based news organization is doing, Stiles sounds like he’s clinging to the flimsy whisps of what remains of the old flogging-for-ads system. That is also reflected in the choice of Gray, who has little experience with the web.

“It’s pretty thin now,” said one longtime staffer at the trade of the newsroom. “The cuts have gone deep.”

To survive, Variety must avoid the mistake made by other newspapers across the country, and it may be too late for that. At some point in the trimming process, the lack of personnel cripples the newsroom’s ability to produce a product that anybody wants to read.

At that point it becomes a downward death spiral, with declining circulation chasing declining ad revenues chasing further cuts to the bottom line.

Who knows if Variety is at that point? It’s not clear that Stiles has been listening to what the town has to say about his product. They’ve been voting with their fingertips. Variety has lost something like 200,000 uniques over the past year. (It is at 659,000 uniques per month on Quantcast. The Hollywood Reporter’s decline has been far more steep, and it now teeters at 311,000 uniques per month.)

One anecdote may be illuminating. In the course of market research for TheWrap, we interviewed prominent insiders about whether they were satisfied with the news they get from the trades. The results were predictable – no, folks said, they were not, for various reasons.

When we posted the video on our launch day, unidentified people at the trades called to threaten those insiders who dared criticize them. In the interest of peace all around, we removed the video.

Threatening dissatisifed customers? For a trade paper challenged to evolve and adapt, that’s some winning strategy.