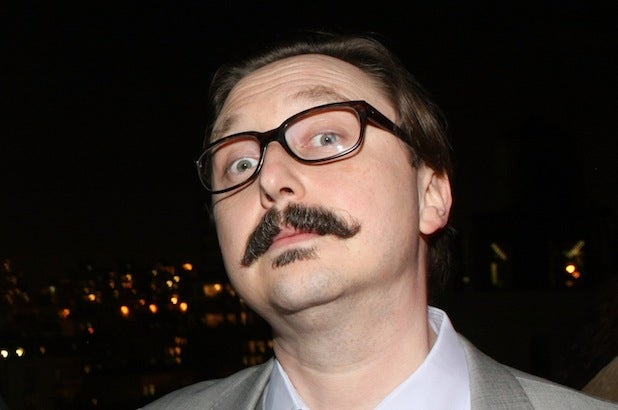 Net neutrality is not exactly laugh riot, but one filmmaker is drawing attention to the issue by aiming for the funny bone.

The result of filmmaker Gena Konstantinakos’ humor-based approach is the 30-minute online mockumentary “The Internet Must Go,” which follows a lobbyist for internet service providers as he tries to make the case for allowing companies to buy greater access to the web.

His pitch, that tiered service is really all about providing a faster, cleaner internet experience, is sent up in “Daily Show” fashion. The piece of comedic agitprop is helped from appearances by the likes of humorist and “Daily Show” regular John Hodgman, U.S. Sen. Al Franken (D-Minn.) and political activist Larry Lessig.

So far the film has attracted over 200,000 views since launching two weeks ago.

“Just that name is so boring that not many people read about this issue and that means that big companies are better positioned to get away with anything they want,” Konstantinakos told TheWrap. “My hope is to keep the term net neutrality and the idea of the open internet on people’s minds, so they can come to their own conclusions.”

The film was produced with backing from non-profit groups like the Ford Foundation and the Media Democracy Fund, and comes out swinging against the attempts by Verizon and AT&T to change regulations that prevent them from blocking or discriminating against certain types of internet traffic.

Opponents of net neutrality counter they have no plans to restrict access or download times, so there is no need for government intervention. As private businesses, they believe they should be able to control the services they provide.

Konstantinakos, who has previously directed TV programs for PBS and ABC News, said she was inspired to make the film after watching Hodgman pretend to make a case for installing the digital equivalent of toll booths in the world wide web in a mock debate he had in 2011 with public radio’s Ira Glass and Damian Kulash of the pop band OK Go. It’s an issue that is close to the satirist’s heart.

“We need to spread the word that net neutrality is about more than getting hits for my ‘Watership Down’ blog,” Hodgman told TheWrap. “The internet is not a luxury.”

The topic may be dense, but the film is timely. It premiered as a federal appeals court is weighing a challenge by Verizon to the Federal Communications Commission’s authority to regulate the internet and prevent internet service providers from discriminating against websites and content. The case seems likely to be decided in favor of the telecommunications giant. Two of the three judges on the D.C. Circuit Court of Appeals panel indicated that they believed the commission lacked the regulatory power to intervene.

The question at the heart of the appeals court case and at the center of the net neutrality battle is whether or not broadband access should be considered a public utility like water or electricity. Konstantinakos and Hodgman clearly think it should — and believe they need a grassroots campaign against armies of lobbyists.

“The moneyed interests are so moneyed and so interested that the internet has to do what it does best, which is agitate, disrupt and spread information that brings to light the amount of lobbying going on around this issue,” Hodgman said.

“Humor is a surgery tool that cuts to the heart of things, otherwise it’s just long-winded pontificating,” Hodgman said.