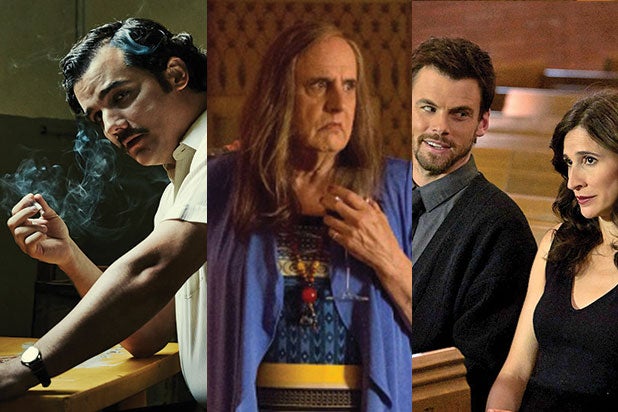 The Golden Globe Awards have been disrupted.

To anyone at CBS bemoaning its lone nomination this morning, take heart: Next year, you’ll have All Access originals. NBC, you may have been shut out, but there’s always tomorrow (and Seeso).

Coupled with Wednesday’s Screen Actors Guild Award nominations, also dominated by Netflix, Thursday’s Globes field reaffirmed the trend that began when Netflix’s “House of Cards” drew nine nominations and three wins at the Primetime Emmy Awards in 2013. Streaming services are now a force to be reckoned with, as much as any cable network and more than any broadcaster. That’s not up for debate anymore.

The content bubble that FX chief John Landgraf warned about last summer at the Television Critics Association press tour has yielded lots of very good TV — and even some great TV. (FX tied Amazon with five nominations.) The primary driver is an influx of money into series programming. And Netflix wields a big chunk of that money. The streaming service will spend an estimated $5 billion on content in 2016, according to an analyst estimate.

Pump that much money into a system and you’re going to get something out of it — like awards statuettes and critical hyperbole. You’re also going to force your competitors to step up their game. Amazon may be primarily in the business of selling shoes and books and lamps and duvet covers, but its original programming effort is backed by one of the deepest-pocketed companies in the world. (The service even scored two nominations for little-buzzed-about “Mozart in the Jungle,” benefiting from the HFPA’s longstanding weakness for foreign-born talent like Gael Garcia Bernal.)

And Hulu, with “Casual” and the upcoming Stephen King-J.J. Abrams series “11.22.63,” appears to be shedding its identity as a rerun hub by following Netflix and Amazon’s example in high-profile original programming.

Cable networks have also been compelled to push harder. Aside from the streamers, the biggest surprise Thursday may be Starz, which drew six nominations, more than any brand other than Netflix and HBO. But like its fellow premium cable networks, Starz is in the process of breaking out of the traditional cable bundle, as indicated by its recent deal with Amazon.

Of course, we should be cautious when trying to read industry tea leaves in a cup brewed by an insular group of foreign journalists.

The HFPA likes what’s new and shiny — hence a comedy-actor field this year that features only one repeat from last year; no nominations for 2015 winners Ruth Wilson, Kevin Spacey and Amy Poehler; and only one nomination for the final season of AMC’s “Mad Men.” HBO’s “Game of Thrones,” the most nominated show at the Emmys in September, was once again shut out.

Nominees Rachel Bloom of the CW’s “Crazy Ex-Girlfriend,” Rob Lowe of Fox’s “The Grinder” and Jamie Lee Curtis of Fox’s “Scream Queens” haven’t done bad work this year, but their shows are all low-rated for broadcast and recipients of mixed critical reaction. Headscratchers, as usual, abound.

But it’s a long time between now and when the 2016 Emmy nomination are announced. Until then, Netflix may be sitting atop TV’s awards throne.