Increased prices didn’t faze Netflix one bit, with the streaming kingpin blowing past subscriber estimates when it reported a record number of new memberships during its Q4 earnings on Monday.

But even more important to Wall Street: its subscribers. Netflix added 8.33 million new memberships during the fourth quarter, blitzing past company and industry estimates of 6.3 fresh streamers. That number lapped its previous record of 7 million new users in a single quarter. The influx has now swelled its subscriber count to 117.6 million across the globe, with 6 million of its new users coming outside the U.S.

“We had a beautiful Q4, completing a great year as internet TV expands globally,” Netflix said in a statement accompanying earnings.

Investors agree, with Netflix running 8 percent to a new all-time high of $248 a share in after-hours trading. The Los Gatos, Calif.-based company has seen its shares increase by more than 70 percent in the last year. 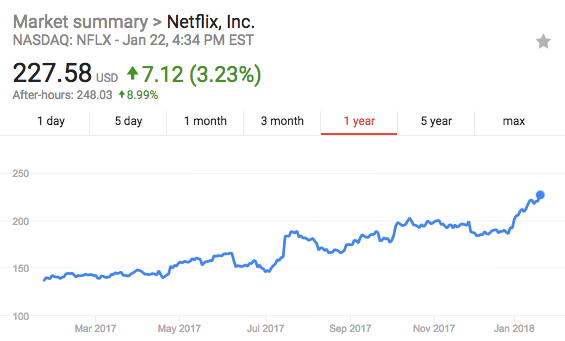 Also Read: 'House of Cards' Is Coming Back for Final Season -- Without Kevin Spacey

Netflix reported $186 million in net income for the quarter. The company added it’ll be boosting its marketing spend from $1.3 billion to $2 billion in 2018. One interesting note in its letter to shareholders was a $39 million non-cash charge for “unreleased content” — something the company didn’t expand on.

Netflix’s fourth quarter saw the return of fan-favorite originals like “The Crown,” as well as the debut of big-budget features like “Bright.” The Will Smith-led movie received a mixed reaction — it pulled in 11 million views in its first three days, but was panned by critics, receiving a 26 percent score on Rotten Tomatoes. Nevertheless, Netflix enlisted director David Ayer to return for a sequel.

And earlier this month, Netflix kicked off awards season with Aziz Ansari winning a Golden Globe for Best Performance by an Actor in “Master of None.”

But to keep the hits coming, the company is planning on spending big, with an $8 billion content budget. Netflix raised $1.6 billion in debt soon after its Q3 earnings to fund “content acquisitions, production and development.” A subscription price increase — with its “premium” plan moving from $11.99 to $13.99 a month — will also be funneled back into its content arms race.

At the same time, Disney has emerged as the clearest threat to Netflix’s dominance. The Mouse House is launching its stand-alone streaming service late in 2019, and it recently took a controlling stake in Hulu thanks to its deal with 21st Century Fox. That gives Netflix plenty of time to solidify its spot atop the streaming food chain, but CEO Reed Hastings has his eyes firmly watching the rearview mirror.

Still, Netflix had been on a roll heading into Monday, with shares of NFLX jumping more than 20 percent since early December. Netflix closed trading on Monday at $227.58 per share.

Netflix will hold a call at 6:00 p.m. ET to discuss its earnings.