The rally, called “‘Stand Up’ in Solidarity” organized by trans activist Ashlee Marie Preston, began as an estimated 10% of Netflix employees in New York and Los Angeles staged a virtual walkout at noon local time in an extraordinarily public rebuke of the company. “We are in this digital prison they built in for us,” Preston said. “They got us hooked on streaming and they got us hooked on these digital spaces that make us think digital activism is enough when we aren’t here in the analog.”

Trans protesters and their allies also faced down a handful of counter-protesters who held up signs like “We Like Jokes” in support of Chappelle and his free speech rights. 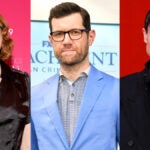 Netflix said on Wednesday morning before the walkouts that it would “respect the decision” of those employees who joined in the protest. “We value our trans colleagues and allies, and understand the deep hurt that’s been caused,” a Netflix spokesperson said in a statement. “We respect the decision of any employee who chooses to walk out, and recognize we have much more work to do both within Netflix and in our content.”

The walkout came just hours after Netflix co-CEO Ted Sarandos admitted that he didn’t handle the initial communication about his decision to defend Chappelle’s “The Closer” special with the “humanity” the situation demanded.

Netflix’s trans employees are not asking for Netflix to take down the special. The group, however, has asked for Netflix to create a fund to develop trans and nonbinary talent; revise the company policies when it comes to “releasing potentially harmful content”; hire trans and nonbinary content executives and recruit more of them for leadership roles; allow employees to remove themselves from promotional content; take down “references and imagery” of transphobic titles within the company offices; acknowledge the harm and Netflix’s responsibility of transphobic content; and add a disclaimer ahead of any potentially harmful content.