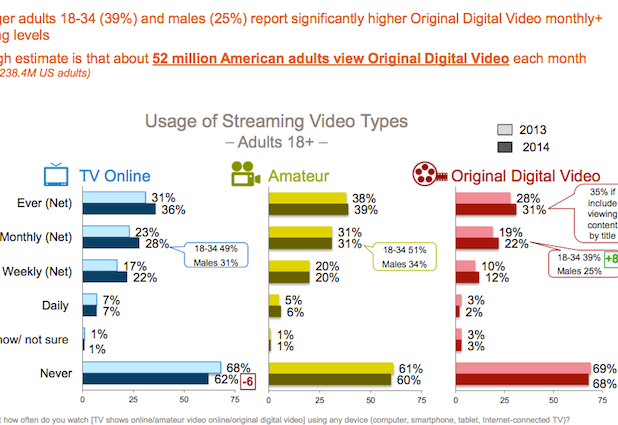 Online video is one of the fastest growing industries in entertainment, and the Interactive Advertising Bureau is out to prove just how quickly it is growing. According to a new study by the organization, more than 20 percent of American adults watch original digital video — shows made specifically for YouTube, Yahoo, Netflix and other online destinations — every month.

That amounts to 52 million people, an increase from 45 million per month last year. The IAB is the host of the Digital Content NewFronts, an event that lets online video players like YouTube and Yahoo pitch advertisers on their upcoming shows.

This study, a companion to a study at the beginning of the two-week showcase, is intended to highlight the growing value of online video. A key phrase for IAB is “adults,” since it proves that it is not just kids watching videos on YouTube and Yahoo.

Yet let’s look at some other numbers.

None of those statistics account for the number of people watching “original digital video.” People use Netflix to watch movies and other TV shows, and go on YouTube to watch music videos and highlights from TV shows. Yet given that massive appetite for video online, could this study, based on surveys and focus groups, be underestimating the number?