Mehdi Dehbi knows that people will probably compare him to Jesus when they see him in “Messiah,” out Jan. 1 on Netflix.

In the 10-episode drama series, Dehbi stars as Al-Massih, a mysterious man who emerges from Syria and quickly amasses a group of dedicated followers who believe him to be the second coming. Michelle Monaghan stars opposite him as Eva Geller, a CIA officer hell-bent on finding out who he really is.

“It’s probably because Jesus is the most known figure in the whole wide world, that people would make the assumption that I’m looking to look like him,” Dehbi said in an on-camera interview with TheWrap, which you can watch above. “It was never a goal to look like him or anybody else.” 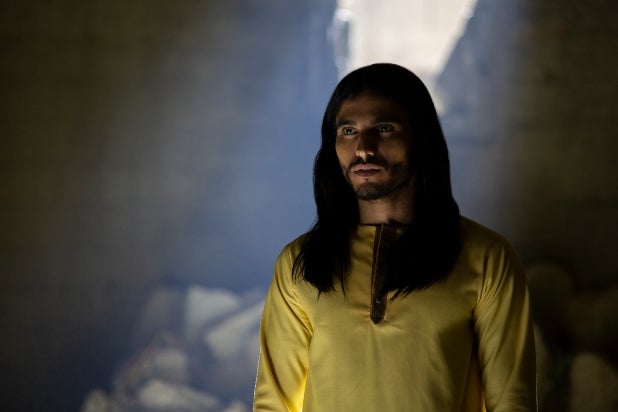 To be clear, the Netflix series has no religious affiliation. But it should come as no surprise that the first role Dehbi ever played as a child was — you guessed it — baby Jesus.

“When I was 3 years old — I grew up in Belgium, and I was raised in a Catholic school — every Thursday we went in the church playing scenes from the Bible. And the first role I ever played was Jesus,” he told us.

So whether you buy into Al-Massih as the real deal or you think he’s a con-man, you have to admit, Dehbi has really come full circle.

Oh yeah, and that long, glossy mane that falls well past his shoulders in the show? He’s since cut it, but he wants you all to know one thing.

Also Read: Confused About 'The Witcher' on Netflix? Showrunner, Henry Cavill Explain How the Timeline Works

As it turns out, Dehbi has been preparing for this role long before Netflix ever came calling.

“Two years prior to the shoot, I started to let my hair grow,” he said. “I had this inner voice that told me, ‘Just let your hair grow.’ And I did. And when I auditioned, my hair was long already.”

The strange thing about it was that Dehbi himself didn’t particularly want to grow his hair out — he was just following his intuition.

Of course, Dehbi wouldn’t let on whether Al-Massih is real or a fake — that’s for you to decide —  but he did tell us that he’s settled on an answer for himself, whatever that may be.

“I had a pact with Micahel [Petroni], the creator, to keep silent and secret all my intentions, so it was very painful. He trusted me with creating the storyline,” he said. “Where he comes from, his background, his intentions, why he’s going where he’s going… what makes him move, what’s his purpose.”

Groomer: Kristen Shaw at The Wall Group using Oribe for hair and Bobbi Brown for skin