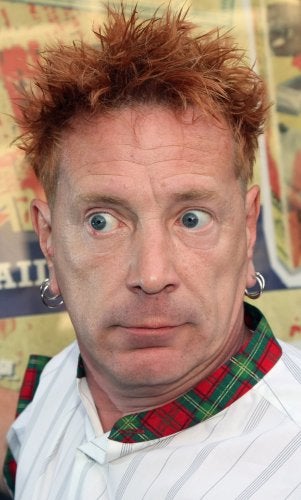 What a drag it is getting old.

Lately the avatar of punk, John Lydon, aka Johnny Rotten, has been hit with accusations of selling out and acting like – well, the middle-aged man he is. He flaks for a British butter company. He lives in Marina Del Rey. He’s a big booster of U.K. industry. And, since 2008, the Sex Pistol and PIL frontman has been the defendant in a lawsuit that accuses him of battery and sexual harassment.

That latter case has been sputtering through L.A.’s civil courts since June, 2008, when a talent producer named Roxane Davis accused Rotten of contributing to three weeks of hell that she experienced.

The story began, as many tales of woe tend to these days, with a reality TV show. In 2007 “Bodog Battle of the Bands” was yet another Darwinist elimination program and ran for one season on Fuse TV. It featured no-name bands that appeared before an “American Idol”-like panel of celebrity rockers who decided which would live and which would die – professionally speaking. Rotten had been hired as a judge, along with the Cult’s Billy Duffy (in the Simon Cowell role?). Before taping, however, Rotten allegedly had a meltdown in Cleveland when he found his Ritz Carlton room did not have a communicating door to his assistant’s room.

Davis’ legal complaint dryly captures the moment: “Ms. Davis apologized, told him that there were no rooms with connecting doors and that she was looking into hotels with connecting doors for the next night. Rotten then began screaming sexual epithets and obscene insults at Ms. Davis. (Let's just say those insults contained words that you don't say to women, unless you want them to cry, claw your eyes out, and/or sue.)

Things went south from there, when Rotten cocked his arm to punch Davis, the complaint alleges, and was only prevented from doing so through the physical intervention of his assistant. Rotten did, according to Keith Fink, Davis’ attorney, manage a grazing blow to her face. The suit actually involves several other defendants and far more charges – including fostering hostile work environments (one of Davis' jobs was to “test” strip clubs for company staff and clients), sexual harassment (besides the gender-animus involved in Rotten’s alleged comments, Davis says her boss pressured her to have sex with him) and wrongful termination, as Davis says she was fired after complaining of the harassment.

The suit presents a Boschian landscape of litigation: There are 19 causes of action cited in the complaint; and Fink, whose past clients have included Courtney Love and a woman who sued American Apparel for sexual harassment/wrongful job termination, is claiming that Rotten, Bodog and the Kirby Organization, a West Hollywood-based talent and booking agency,  should be all considered to be Davis’ co-employers.

Fink also complains that Bodog Music Ltd. “is hiding under a rock” and is unreachable. Its parent company, Bodog Entertainment Inc., whose main business seems to be online gambling, has no known address outside of Antigua and, Fink says, its computer servers are located on Canadian Indian reservations.

Most potentially costly lawsuits never go to trial although, here, one has been tentatively scheduled for the spring.

“Every case has a number,” says Keith Fink “and [Rotten’s lawyers] put a number out there a long time ago.” Fink would not disclose the kind of figure he and his client have in mind to settle. Dennis Wheeler, of Haight Brown & Bonesteel, is representing Rotten and declined to speak to TheWrap.