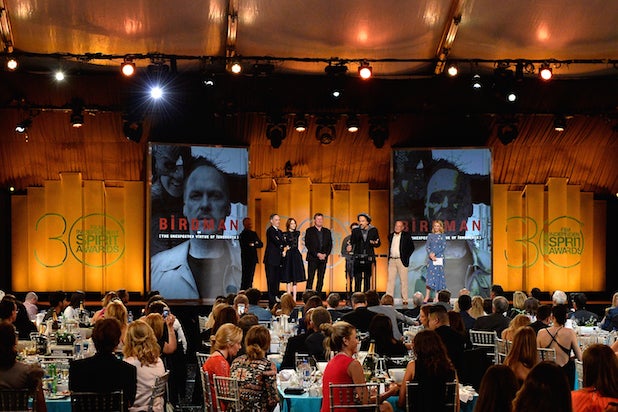 For the last few years, it seemed as if voters for the Film Independent Spirit Awards had thrown out the old catchphrase, “Win on Saturday, lose on Sunday.”

But this year, when the Spirit Awards take place on Saturday afternoon in Santa Monica, that phrase might be appropriate once again.

The phrase had originated during the years when acclaimed films would routinely win the Spirit Award for Best Film, which is always handed out the day before the Academy Awards, but then lose the Best Picture Oscar the next day, usually to something bigger and less indie.

There was “Sex, Lies and Videotape” winning the Spirit Award before “Driving Miss Daisy” took the Oscar; “Pulp Fiction” at the Spirits, then “Forrest Gump” at the Oscars; “Fargo,” then “The English Patient”; “Sideways,” then “Million Dollar Baby”; “Brokeback Mountain,” then “Crash”; “Little Miss Sunshine,” “The Departed.”

Over the first 26 years of the Spirit Awards, only one film was named Best Picture by both groups: “Platoon,” back in 1987.

But in the last four years, it has happened three times, with “The Artist,” “12 Years a Slave” and “Birdman.”

Suddenly, the catchphrase morphed into “win on Saturday, win again on Sunday,” as the line between the Oscars and the Spirits grew increasingly blurry.

Also Read: Spirit Awards: 'Beasts of No Nation' Gets a Boost, 'Room' Is Locked Out of Key Races

And that’s not just in the top category. Of the last eight acting winners at the Spirit Awards, for example, seven went on to win the Oscar: Julianne Moore, J.K. Simmons and Patricia Arquette last year, and Matthew McConaughey, Cate Blanchett, Jared Leto and Lupita Nyong’o the year before.

This year, though, the Film Independent Spirit Awards are emphasizing the Independent in their name, and there’s little chance for that kind of Spirit/Oscar correlation.

Only one Oscar Best Picture nominee, “Spotlight,” is up for Best Film at the Spirit Awards. The other Spirit nominees are “Anomalisa,” “Beasts of No Nation,” “Carol” and “Tangerine,” with the low-budget Oscar nominee “Room” conspicuously missing from the lineup chosen by a Film Independent jury.

But even if “Spotlight” wins the Spirit Award and the Best Picture Oscar, which it could, the acting winners will be wildly different, with “Room” star Brie Larson the only Saturday favorite who could also win on Sunday.

There’s not a single male acting nominee at the Spirit Awards who is also in the Oscar Best Actor or Best Supporting Actor race, and not a single supporting female nominee. In fact, the only overlap is in the Spirits’ Best Female Lead category, where Larson is up against Oscar Best Actress nominee Cate Blanchett and her “Carol” co-star Rooney Mara, who the Oscars put in the supporting category.

Another way to tell these are not the Oscars acting categories: Five of the 20 nominees aren’t white. African actors Abraham Attah and Koudous Seihon are in the Best Male Lead category, Idris Elba is in supporting and black transgender actresses Kitana Kiki Rodriguez and Mya Taylor were both nominated for “Tangerine.”

The Spirit Awards juries went aggressively indie this year, partly because many of the big Oscar contenders are well over the Spirits’ $20 million budget limit. That’s a good thing, because these awards are at their most interesting when they stop trying to be Oscars Lite and get idiosyncratic.

So the Best Male Lead category, for instance, consists of Christopher Abbott in “James White,” Abraham Attah in “Beasts of No Nation,” Ben Mendelsohn in “Mississippi Grind,” Jason Segel in “The End of the Tour” and Koudous Seihon in “Mediterranea.” The combined grosses of those five films don’t even hit $4 million, less than half as much as the box office tally of “Trumbo,” the lowest-grossing of the five films containing the Oscar Best Actor nominees.

The tricky thing about the Spirit Awards is that while the nominations are chosen by blue-ribbon panels that can often be adventurous, the final vote is open to all members of the non-profit organization Film Independent, which consists of both filmmakers and movie fans who pay yearly dues.

That means the winners tend to be the highest profile, most mainstream films. On Saturday, that favors Tom McCarthy’s journalism drama “Spotlight,” although Todd Haynes‘ “Carol” certainly has a chance to pull off an upset. (It led all films with six Spirit Award nominations, to five for “Beasts of No Nation” and four for “Spotlight.”)

In the acting categories, Larson seems to be the one sure thing, though Jason Segel could be a lead-actor favorite on visibility alone. For supporting, Paul Dano (“Love & Mercy”), Idris Elba (“Beasts”) and Michael Shannon (“99 Homes”) are strong male contenders, while the female favorites are probably Jennifer Jason Leigh (nominated for her voiceover performance in “Anomalisa,” not for the ineligible “The Hateful Eight”) and transgender performer Mya Taylor in “Tangerine.”

And maybe, with “How will this mirror the Oscars?” less of a question than it has been in recent years, we’ll be able to focus on categories at the heart of the Spirit Awards — like Best First Feature, whose nominees are “The Diary of a Teenage Girl,” “James White,” “Manos Sucias,” “Mediterranea” and “Songs My Brother Taught Me,” or the John Cassavetes Award for ultra-low-budget films, with “Advantageous,” “Christmas, Again,” “Heaven Knows What,” “Krisha” and “Out of My Head.”

The show will be hosted by Kate McKinnon from “Saturday Night Live” and Kumail Nanjiani from “Silicon Valley,” and broadcast live at 2 p.m. PT / 5 p.m. ET on IFC.

While the 2019 and 2020 Academy Awards went without a host, TheWrap looks back at the best Oscars hosts, from Anne Hathaway to Jimmy Kimmel.