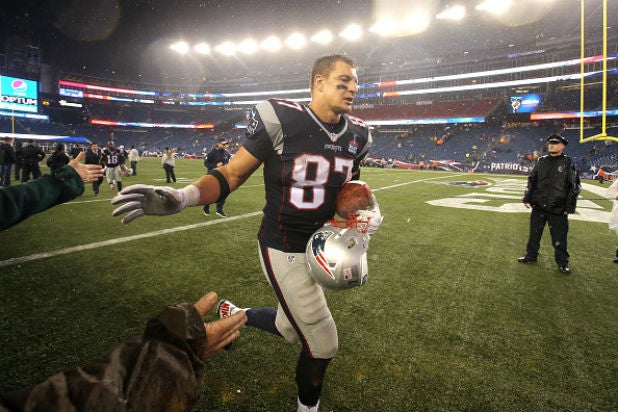 After beating the “Deflategate” suspension in court last week, Tom Brady took his New England Patriots to the first win of the NFL season on Thursday with a final score of 28-21 over the Pittsburgh Steelers.

Chants of “BRA-DY! BRA-DY!” filled the stadium as the star quarterback took the field a week after a federal judge vacated his four-game suspension.

Shortly after the team unveiled the banner for their Super Bowl XLIX victory at Gillette Stadium in Foxborough, Massachusetts, tight end Rob Gronkowski scored the first touchdown of the 2015 season, before going on to score two more — topped off with his signature “Gronk spike” celebration.

Later however, the chant that caught even Brady and Gronk in their tracks was “Where is Roger?”  — a not-so subtle jab at NFL Commissioner Roger Goodell, who declined to attend the season opener after spending the past seven months working to ensure the Patriots QB wouldn’t be in uniform Thursday night.

Some fans dressed him up in a “Where’s Waldo?” stripped sweater on a giant poster during match-up.

The cheeky taunt soon turned into a Twitter trend, with fans both in the stadium and on social media speculating over Goodell’s whereabouts. Even former ESPN analyst and upcoming HBO host Bill Simmons caught onto it, as Maria Menounos congratulated her team on their win.

“Everything felt right in the world when I chanted “where is Roger” with the rest of Patriots Nation at @GilletteStadium,” wrote one user.

See the jubilant — and playful  — tweets below.

Yay!! Congrats to the #Patriots on their win! #PatriotsNation

Patriots fans taunt NFL commissioner with ‘Where is Roger?’ chants: If there was one huge winner in the federal… http://t.co/rE6bmraCHM

Nick Stevens: 'Where is Roger?' chant is 'so Boston' – #Patriots @AhoyNickStevens http://t.co/tHO3jIXN4m

To the fans chanting "WHERE IS ROGER?" I have your answer right here: pic.twitter.com/uIR9VHYtCh