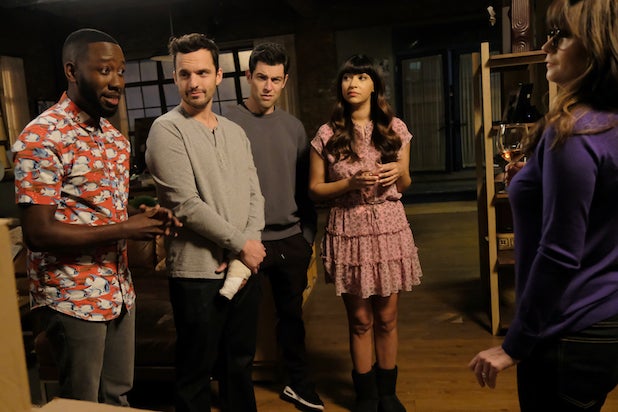 (Spoiler alert: Please do not read ahead unless you’ve seen the series finale of “New Girl”)

They didn’t have to move?!?

The series finale of “New Girl” aired Tuesday night, ending the whole show with one of the most elaborate pranks Winston (Lamorne Morris) has ever pulled off on the Fox sitcom. Sorry, “Prank Sinatra.”

See, Winston, Cece (Hannah Simone) and Schmidt (Max Greenfield) had spent the entire final episode packing up Jess (Zooey Deschanel) and Nick’s (Jake Johnson) belongings, as the newly-married couple were being evicted from the loft that every member of the core group had lived in at one time or another, by a company called Engram Pattersky (which also happened to be the episode’s title). The night was full of laughter and tears and one last game of True American.

Only just as they were done loading the truck, Winston revealed he had planned the entire ruse, and they didn’t have to move. What, you didn’t realize if you rearrange the letters in Engram Pattersky you get “My Greatest Prank”? Oh, snap.

Now, who would have thought Liz Meriwether’s goofy ensemble comedy would end with a twist that required “The Usual Suspects” like flashbacks to break it down? Oh, the creator said it was the only way to could have closed it once the writers thought of it.

“It was our writer — who’s been with the show since the beginning — Berkley Johnson, who came up with the idea,” Meriwether told TheWrap in an interview last week. “And as soon as he said it in the room, we were all just dying laughing. and it felt really right. And he loves word puzzles, so he came up with the Engram Pattersky; that, that spelled ‘my greatest prank.'”

“But I think the idea of, we knew that we wanted Winston to have one big final prank,” Meriwether continued. “And he always goes too big or too small. So we were pitching around different ideas. And when Berkeley pitched that, it kind of made sense. I think we all felt like them getting evicted or having to leave the apartment was going to feel a little expected. So there was something great about the prank idea to give it a little bit of a final twist as opposed to, ‘Oh, they have to leave and it’s sad.’ It was great.”

It was the greatest, Liz.