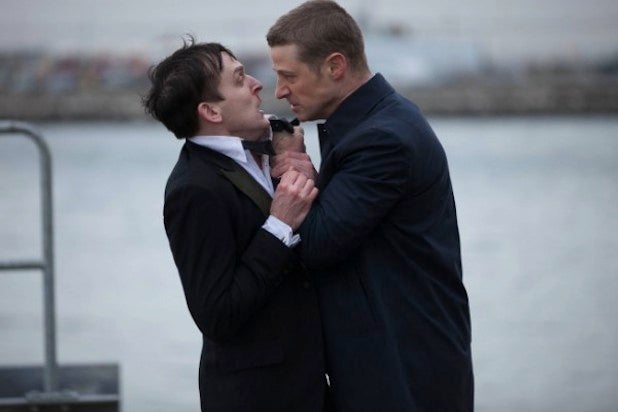 Jada Pinkett Smith is a sexy mob boss and future supervillain and The Penguin is just a young punk getting hassled by a cop in five new stills from Fox’s “Gotham.”

Penguin, a.k.a. Oswald Cobblepot (Robin Taylor), isn’t just getting hassled by any cop, though. Detective James Gordon (Ben McKenzie) looks as menacing as Batman while giving the criminal the shakedown (above), and maybe a bloody nose, too.

Donal Logue, Barbara Kean, Camren Bicondova, Sean Pertwee, Cory Michael Smith and Zabryna Guevara co-star in the series that explores the origins of the DC Comics super-villains and vigilantes who inhabit Gotham, and traces one cop’s rise through a dangerously corrupt city teetering on the edge of evil.

Here are four more stills from the new crime drama airing Mondays this fall on Fox.