“Iron Man 2” fans just got thrown some more fresh meat with the launch of a website promoting “Stark Expo 2010.” 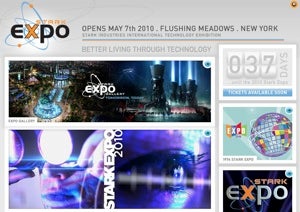 The site, which promises "Better Living Through Technology," has all the trappings of a traditional corporate page for a “Stark Industries International Technology Exhibition” supposedly set for May 7 in Flushing Meadows, New York.

“Iron Man” came out in 2008 in a relatively low-key fashion, compared to the hype for the sequel. But with the first film having made over $500 million in worldwide box office, Marvel Studios and Paramount aren’t missing a single opportunity this time round.

Star Robert Downey Jr. and director Jon Favreau kicked things off with a sneak peek of the film at Comic-Con last summer, followed by a constant release of posters and multiple trailers, including the latest one debuting in full on Jimmy Kimmel just after the Oscars (along with Downey Jr.) and a short time later on “American Idol.”

And the volume got cranked up a notch when it was announced that AC/DC would be providing the film’s soundtrack. That album, full of 15 of the Australian rocker’s greatest hits, goes on sale on April 19.