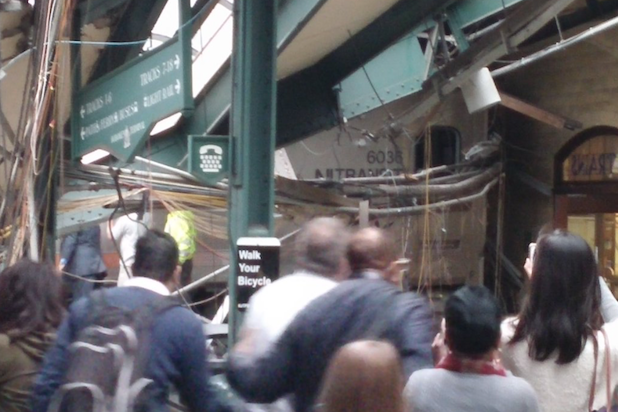 State officials said at least one person is dead and two more were critically injured when a New Jersey Transit commuter train crashed into a rail station in Hoboken, New Jersey, during morning rush hour on Thursday.

A New Jersey Transit spokesperson said that more than 100 people are injured. Witnesses reported seeing one woman trapped under concrete and many people bleeding, according to the Associated Press.

Emergency crews are on the scene at the busy Hoboken station, where many people commute into Manhattan on a daily basis. Photos from the scene on social media show a damaged New Jersey Transit rail car inside the station, surrounded by debris.

The train’s engineer is in critical condition but cooperating with law enforcement, New Jersey Gov. Chris Christie said at a press conference.

The National Transportation Safety Board is sending investigators to the scene. The cause of the crash has not been determined and there is an active rescue operation underway.

Hoboken is located directly across the Hudson River from New York City, and the station where the crash occurred is also home to the PATH, which is like an extension of the subway in New Jersey. All PATH service at the Hoboken station is suspended. NJ Transit said service in and out of the station was also shut down.