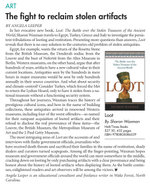 The fight to reclaim stolen artifacts By Angela Leeper

In her evocative new book, Loot: The Battle over the Stolen Treasures of the Ancient World, Sharon Waxman travels to Egypt, Turkey, Greece and Italy to investigate the persistent tribulations of looting and restitution. Presenting more questions than answers, Loot reveals that there is no easy solution to the centuries-old problem of stolen antiquities.

Egypt, for example, wants the return of the Rosetta Stone from the British Museum, the Denderah zodiac from the Louvre and the bust of Nefertiti from the Altes Museum in Berlin. Western museums, on the other hand, argue that after hundreds of years, artifacts have a new cultural value in their current locations. Antiquities seen by the hundreds in mere hours in major museums would be seen by only hundreds annually in their source countries. And what about security and climate-control? Consider Turkey, which forced the Met to return the Lydian Hoard, only to have it stolen from a national museum without a functioning security system.

Throughout her journeys, Waxman traces the history of prestigious cultural icons, and how in the name of building collections, these antiquities arrived in renowned Western museums, including four of the worst offenders—so named for their rampant acquisition of looted artifacts and their refusal to disclose the real provenance of these items—the Louvre, the British Museum, the Metropolitan Museum of Art and the J. Paul Getty Museum.

The most intriguing areas of Loot are the accounts of and interviews with flashy government officials, journalists who have received death threats and sacrificed their families in the name of restitution, shady dealers and curators turned scapegoats. Among all the finger-pointing, Waxman hopes museum and government officials around the world can meet somewhere in the middle, cracking down on looting by only purchasing artifacts with a clear provenance and being honest about the history of looted artifacts when displaying them. As the battle continues, enlightened readers and art observers will be among the victors.