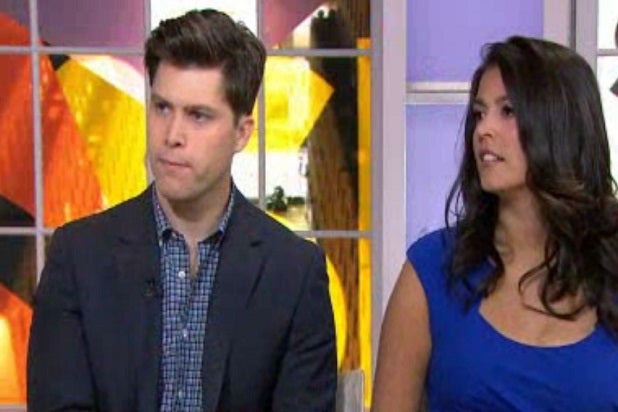 Colin Jost — who makes his debut as “Weekend Update” co-anchor alongside castmate Cecily Strong on Saturday — appeared on NBC’s “Today” Thursday to discuss his upcoming new role on the series.

So what does Jost think of it? In a word, “intimidating.”

Jost, who also serves as head writer on the late-night institution, added that coming to grips with the ghosts of “SNL” past. Discussing a studio hallway lined with photos of former “Saturday Night Live” cast members, Jost noted, “[Y]ou see all these photos of people through the years and great sketches, and you both appreciate it, but you also have to very quickly just be like,  ‘Alright, I gotta try out my own thing and do it,’ because otherwise you go crazy.”

Also read: Seth Meyers on ‘Late Night’ vs. ‘SNL': ‘Craziest Thing Is Just Having to Be on Camera More’

Asked by Savannah Guthrie whether the pair had been honing their witty banter, Strong shot back, “Let’s not say ‘witty’ yet; it’s just banter at first.”

Watch Jost and Strong talk “Weekend Update” in the video below.

news, world news, and news about the