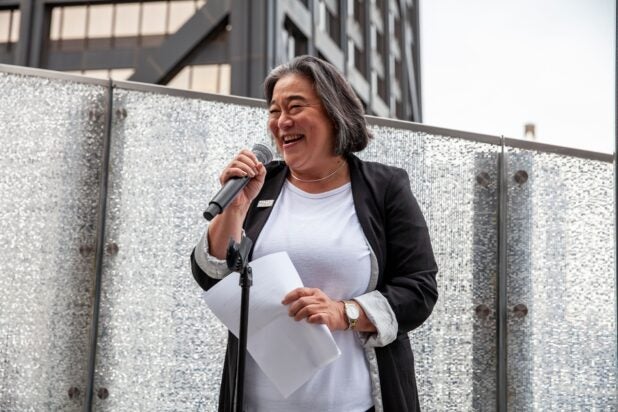 Monday morning, Tina Tchen, lawyer and former chief of staff for then-First Lady Michelle Obama, was announced as the new president & CEO of Time’s Up. Following the announcement, she told TheWrap she’s happy to be at the helm during “these turbulent times.”

Tchen, who is the first full-time president and CEO at Time’s Up since Lisa Borders abruptly left in February after her own son was accused of sexual harassment, explained she and the group are looking ahead to the future, thanks, in part, to a grant from Melinda Gates.

Tchen’s CEO announcement came with the launch of the Time’s Up Impact Lab, which “will pioneer research driving toward public policy, private sector, and culture change to address sexual harassment and other forms of discrimination, as well as broader systemic inequality and injustice at work,” according to a release from the organization. Gates’ Pivotal Ventures gave the inaugural grant.

“We really need to build the capacity to research and develop data to suppose and find out what really works,” Tchen told TheWrap. “What policies, what programs, what workplace changes actually really will change workplace culture for everyone?”

She spoke of continuing to build networks in various industries from entertainment to healthcare to newsrooms.

“The fastest way to make this change is to have companies and employers change their policies. It may take a long time to get a bill through the legislature, through Congress, but a company can change its policies overnight and make things better for its workers,” she said of the Time’s Up strategy.

As for stepping into the role after Borders’ departure, Tchen said this:

What happened with Lisa and her family is really not part of Time’s Up. It’s something that happened with respect to Lisa and her own family and what I will say is she resigned for personal reasons and we support people making personal decisions for their families. So we understand that. What really it means for Times Up is we haven’t had a CEO as a result for the last six months-plus and I am really looking forward nowto stepping into that role and providing some of the strategy and some of the direction that we have not had because we haven’t had someone at the helm.

She continued, “We haven’t had a full time president and CEO and that’s been needed, especially in these turbulent times when there’s constant news change and we need to be strategic and have a voice so I’m really thrilled to be able to step into that voice and become that for Times Up.”