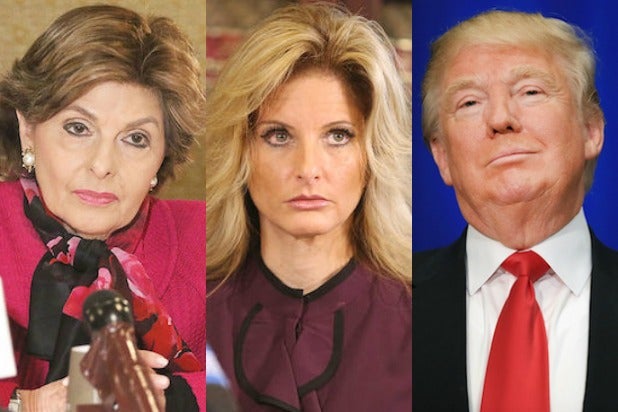 Donald Trump’s campaign to discredit his accuser of sexual misconduct, former “Apprentice” contestant Summer Zervos, by bringing her cousin into the picture isn’t flying with Zervos’ attorney, Gloria Allred, who is fighting back… by discrediting the discrediter.

Allred revealed texts during a press conference Sunday between Zervos and her cousin, John Barry, which showed Barry to be a self-proclaimed “loser” who was fired from their family’s restaurant after failing to open the establishment.

“I started puking… in the morning. I understand if I’m fired,” said Barry in a set of texts to Zervos that were written “some time ago” and revealed by Allred during a press conference on Sunday. “I’m a loser. I can’t show up to open a restaurant,” he also wrote.

Trump’s camp recently put forth Zervos’ cousin, Barry, who said he doubts her story of sexual misconduct. “She has had nothing but glowing things to say about Mr. Trump,” he said.

Allred was also flanked by Zervos’ friend, social worker Ann Russo, who is among three people who have said Zervos confided in them about Trump’s alleged misconduct.

“I believed her six years ago and I believe her today,” Russo said on Sunday. “I have every confidence in Summer’s integrity. She is an honest person with very high moral and ethical standards.”

Zervos came forward on Friday, accusing the current GOP presidential nominee of sexual misconduct, claiming that Trump kissed her against her will and came on to her.

Trump denied Zervos’ accusations, writing on Facebook, “To be clear, I never met her at a hotel or greeted her inappropriately a decade ago. That is not who I am as a person, and it is not how I’ve conducted my life.” (See full Facebook post below.)

Trump also claims to be the victim of a political smear campaign, saying in part, “It’s all false stuff.”

During a previous press conference with Allred, Zervos recounted an alleged encounter with Trump at the Beverly Hills Hotel, during which she said Trump kissed her “very aggressively,” placed his hand on her breast and thrust his genitals.

“I was very conflicted as to what occurred. I wondered if the sexual behavior was some kind of test and whether or not I had passed,” she said. “Obviously, he still wanted to talk to me about a job even though I had turned his sexual advances down.”

However, Zervos said, eventually she was offered a job at Trump’s golf course at half of her salary requirements. After getting the run-around from Trump, Zervos recalled, he ultimately told her that he was laying off “thousands of employees” and couldn’t afford to hire her.

Zervos is the latest in a string of women to accuse reality TV personality-turned-politician Trump of sexual misconduct.