“I don’t belong to any political party but I am Jewish and newsflash: my home country is the United States. To suggest otherwise is bigotry,” tweeted CNN anchor Jake Tapper.

Others, like The Daily Beast’s editor at large Molly Jong-Fast, were more succinct: “My ‘home country’ is America,” she wrote.

By Thursday morning, Eric Bolling announced he would be filling in for Stinchfield for the rest of the week on his primetime show — though a rep for Newsmax later explained that Stinchfield was “speaking at an event” that “had been planned for a while” and that is why he would not be on air on Thursday or Friday.

And Stinchfield clarified his remarks in a tweet on Thursday: “To be clear. American Jews are Americans. Period. Full stop,” he wrote. “Why OK for NPR to call it a ‘homeland’ for Jews, but I’m anti-Semitic?” He then linked to an NPR story that referred to Israel as a homeland — not the “home country” — for Jewish people. 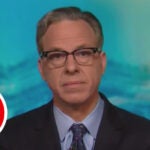 He also clapped back directly at Tapper: “your home country appears to be Disneyland ! It’s the only way to explain your delusion about @joebiden and his sympathies for the terror group Hamas.” In response to another critic accusing him of anti-Semitism, Stinchfield misspelled “Isreal.”

The furor kicked off with Stinchfield’s remarks on his Wednesday primetime show. “If you are Jewish and you are a Democrat and you are living in America today, how do you support an administration that turns its back on your home country?” Stinchfield asked during the broadcast.

The clip spread on Twitter, with notable Jewish figures in American media calling him out for reinforcing an anti-Semitic trope of “dual loyalty.”

“The United States is the ‘home country’ for American Jews. The suggestion that Jews owe their fealty to a nation other than the one they live in is a vile centuries-old antisemitic slur,” wrote “Big Bang Theory” executive producer Bill Prady, who added that Newsmax is “promoting anti-Semitism.”

Others questioned whether the Catholic Stinchfield considers Vatican City is home, somehow, while more still declared the host a straight-up anti-Semite.

“For many Jews, not only is Israel *very distinctly not* our ‘home country,’ but any country we might call ‘home’ is either the site of recent existential violence against us or continued settler colonialism that we have created and/or abetted,” said Judd Greenstein, referencing the ongoing turmoil in the region that prompted Stinchfield’s comments in the first place.

Stinchfield did not immediately respond to a request for comment. 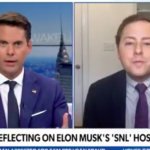 Also Read:
Newsmax Guest Calls Out Network on Air for ‘Still Telling That Lie’ About 2020 Election