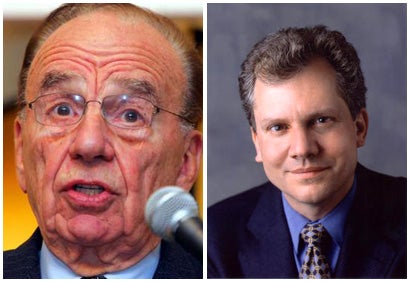 For months, New York Times executives have been downplaying the brewing rivalry with the Wall Street Journal — while simultaneously digging in for a fight.

"We don't shy away from the competition," NYT Co. president Janet Robinson told investors last week. "We never have. We fully understand how to compete and in fact we enjoy it."

With the Journal's "Greater New York" section on the street as of Monday, the Times seems to be at least somewhat wary of the threat Murdoch and his gang present: a willingness to aggressively spend a lot of money, with an eye on not just winning, but on wounding New York's paper of record.

And they're apparently not wasting any time. Robinson said the Journal would compete, initially, "by giving away a lot of free advertising."

And president and general manager Scott Heekin-Canedy insists the Times “won’t get in a pricing war.”

On Monday, the day of the Journal's “Greater New York” launch, Arthur Sulzberger, Jr. and Robinson fired off a memo to advertisers reiterating their stranglehold on the affluent market – while lobbing a few grenades Rupe’s way.

“Some folks just have a different learning curve,” the memo reads. “After 120 years of existence, The Wall Street Journal this morning has finally decided to cover New York north of Wall Street.

“We welcome the Journal’s new local section. The New York Times has been the paper of record in New York for nearly 160 years, and we know just how difficult it can be for start-ups to develop a following. … While there will be much sound and fury to this new endeavor, we thought we would take this opportunity to remind everyone about our position of strength in the New York marketplace.”

The Times followed that with metrics touting their influence over, among others, the rich, women, art enthusiasts, theatergoers, opinion leaders and book buyers. (They even created a slick new video ad currently playing in New York City cabs and local television.)

Where the Journal entry could hurt them is their ability to set the ad market, said Ken Doctor, an industry analyst and author of “Newsonomics." “The Times has built up their pricing power – they’re a premium buy,” Doctor said. “If Murdoch decides to push the deep discount (sales) strategy, or expand to national editions, if I were the Times, I’d be worried.”

“It really depends on what the reader response is,” said Roberta Garfinkle, director of print strategy at Targetcast tcm. “We won’t know that for awhile.”

Murdoch, the outspoken, bullish, cocky 79-year-old media mogul and newspaper baron, is betting big on this war against the Times anyway, spending a reported $15 million to $30 million on the launch of "Greater New York."

Sarah Ellison — whose “War at the Wall Street Journal” about Rupert Murdoch’s $5 billion 2007 acquisition of Dow Jones, is out next month — calls this turf tussle "the last great newspaper war of the 20th century." Doctor said. “It’s a throwback: A 20th Century war in the 21st Century.”

“For Murdoch, it’s a two-fer,” Doctor said. “Any incremental revenue he makes takes dollars out of the Times' pockets.”

But the New York Post – Murdoch’s other New York paper – is losing an estimated $70 million a year (according to the Times).

So why is Murdoch bothering starting a war he likely could lose money on?

He can afford to. The billions of dollars “Avatar” made News Corp.’s Fox studio gives Murdoch some serious wiggle room in terms of expanding his newspaper empire.

“Any dollar he spends (on the Wall Street Journal) he can afford to subsidize with ‘Avatar,’” Doctor said. “The Times doesn’t have that luxury.”

According to Slate’s Jack Shafer, it comes down to a stubborn, insatiable ego.

“Every couple of years, Rupert Murdoch remembers what he really wants from life,” Shafer wrote in a recent column. “He sets aside whatever international conquest currently sits on his to-do list, and he reinflicts himself upon New York City by purchasing, repurchasing, or reinvesting in a New York media property.

“All Murdoch wants is for the people of Manhattan to pay homage to him, and for the last 35 years they've basically refused his every advance,” Shafer wrote. “He can truly win only if others lose big, and the other New York institution that must lose big for Murdoch to be happy is the New York Times.”

The truth is, it really could be the last great newspaper war for the simple reason that newspapers may soon cease to be war-worthy — at least in print form.

At an event in Beverly Hills on Monday, fellow mogul and Viacom chairman Sumner Redstone called Murdoch foolish for investing in the “ink” business, predicting there “won’t be any newspapers in two years.”