Universal and Blumhouse announced on Tuesday that the fourth installment of its hit “Purge” series will be called “The First Purge,” and will be a prequel that shows how the annual bloodbath first came to be.

The last film in the series, “The Purge: Election Year,” ended with an anti-Purge senator becoming the next president on a campaign platform of ending The Purge. Now, “The First Purge” will show the rise of the extremist political party known as The New Founding Fathers of America and how it began as an experiment in an isolated community to see if allowing humanity’s darkest impulses to run wild for one night could lead to lower crime rates. Of course, the experiment hit a raw nerve, as America’s marginalized people and their brutal oppressors clash in an orgy of violence that quickly consumes the nation.

And just like how “Election Year” tapped into the rage of the 2016 presidential campaign with the tagline “Keep America Great,” “The First Purge” connects itself to Donald Trump with a teaser poster showing the film’s title embroidered on a red cap that’s reminiscent of the President’s “Make America Great Again” hats. 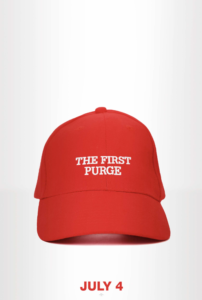