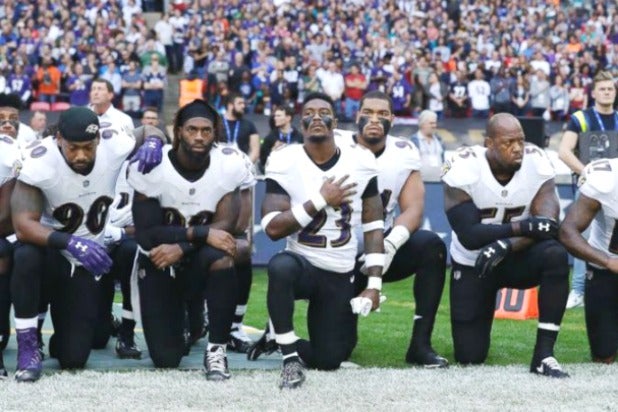 It doesn’t look like any NFL players will be disciplined for kneeling or locking arms in protest during the playing of the National Anthem. But First Amendment experts say most employees can be fired from many jobs for exercising their freedom of speech.

Federal law does not protect workers in the private sector — only government employees.

“There is no federal law protecting against discrimination or retaliation for political activity” at private companies, Paula Brantner, a senior adviser at Workplace Fairness, told TheWrap. “A lot of people think they have First Amendment rights, but those only apply to government employees.”

The power of employers to dismiss workers was demonstrated in August when Google fired one of its engineers, James Damore, for circulating a memo lashing out at the Silicon Valley giant’s efforts to bring more women into the male-dominated company.

In Berkeley, the Top Dog hot dog chain parted ways with one of its cooks, Cole White, when sleuths on Twitter said he had taken part in the white nationalist march in Charlottesville, Virginia. (He denied he is a white nationalist, and Top Dog said he had resigned, not been fired.)

Californians like Damore and White have some protections many other Americans don’t because California law forbids employers from firing workers for off-duty partisan political activity if it is legal. Colorado, Connecticut, Montana, New York, North Dakota, and Washington, D.C. have also enacted some speech protections for workers, but those protections are not absolute.

American workers in the private sector who work in states without those laws have no protection for political speech, University of Dayton law professor Jeannette Cox wrote in a recent American Bar Association article.

But government employees are in a different position, Harvard Law professor Mark Tushnet told TheWrap. He said that under the First Amendment, government workers who speak about public policy can’t be fired unless their speech interferes with their jobs — by provoking fights, for example.

“Typically, though, governments aren’t able to make that showing,” he said.

The nation’s 22 million government workers got a boost last year when the Supreme Court ruled that the First Amendment forbids government bosses from firing workers for supporting a political candidate the boss doesn’t like.

“The Constitution prohibits a government employer from discharging or demoting an employee because the employee supports a particular political candidate,” Justice Stephen G. Breyer wrote in the decision.

But NFL owners have broad freedom to fire players perceived to violate the NFL’s Personal Conduct Policy. According to the policy, posted on the NFL website, “prohibited conduct” includes “conduct that undermines or puts at risk the integrity of the NFL, NFL clubs, or NFL personnel.”

Discipline can include a fine, suspension or banishment from the league with an opportunity to reapply, the policy states.

In addition to the policy, players may be required to sign contracts with a “morals clause,” which gives team owners another potential justification for firing them if they say or do anything that might potentially make the team look bad.

A copy of former running back Arian Foster’s contract with the Houston Texans, posted online, provides an example of some morals-clause language. (If you’re wondering why his contract is online, here’s an explanation.)

The language requires him “to give his best efforts and loyalty to the Club, and to conduct himself on and off the field with appropriate recognition of the fact that the success of professional football depends largely on public respect for and approval of those associated with the game.”

Of course, teams don’t have to explicitly state that they are cutting a player for making a political statement, or violating any policy. They can simply unofficially blacklist someone they deem difficult or troublesome.

Since Kaepernick opted out of his contract with the San Francisco 49ers to become a free agent in March, no team has signed him. President Trump has taken partial credit for that fact.

“It was reported that NFL owners don’t want to pick him up because they don’t want to get a nasty tweet from Donald Trump,” he said in July.