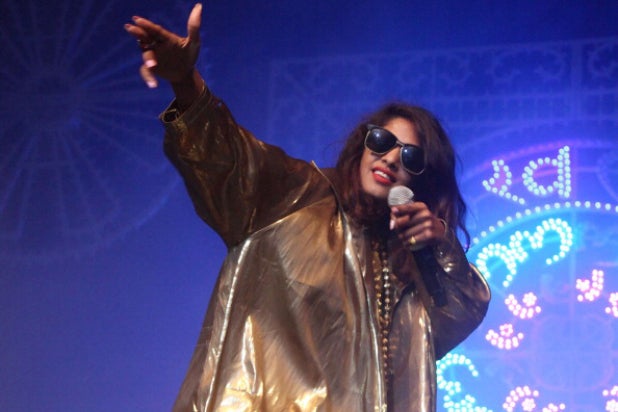 The National Football League wants hip-hop artist M.I.A. to fork over an additional $15.1 million for flipping the middle finger to the TV audience during her 2012 Super Bowl Halftime Show with Madonna.

NFL is requesting the large sum — in addition to the original $1.5 million that it is still seeking in damages — based on the fact that advertisers paid that much per minute for ad placement during the big game that year.

Not surprisingly, M.I.A. (real name Mathangi “Maya” Arulpragasam) and her team at $10 Protocol, Inc., is vehemently shooting down the latest value placement, saying that the claim “lacks any basis in law, fact, or logic.” In docs filed before the American Arbitration Association on Friday, the defendants also accuse NFL Enterprises LLC of intending “to bully and make example of” the rapper.

The NFL and M.I.A.’s representatives did not immediately respond to TheWrap‘s requests for comment.

The counter-claim calls out the NFL for hypocrisy in looking the other way when its players engage in the exact same middle-finger-waving behavior: “At its core, NFL’s claim is founded upon the false assertion that NFL has a wholesome reputation, that its goodwill has been damaged, or that it is somehow has been damaged.”

As further evidence of the out-of-balance punishment, the arbitration documents compared the league’s proposed 15-yard penalty this season for a player using the N-word, against the now-$16.6 million lawsuit for a performer sticking up the wrong digit.

Also, the public backlash doesn’t justify the fine, the defendants in the suit claim. The Federal Communications Commission received 222 complaints from the M.I.A. incident versus 542,000 complaints for Janet Jackson‘s “Nipple-Gate” in 2004.

Plus, there is precedent for this type of behavior during other Super Bowl Halftime Shows, M.I.A.’s attorneys claim. The filing cited Michael Jackson’s 1993 Halftime performance, “during which he repeatedly grabbed or fondled his genitalia,” and Prince’s in 2007, when he caressed the neck of “an erect oversized phallus” (his guitar) for all to see.

The doc also mentioned Madonna‘s portion of the 2012 routine as an example of ignored vulgarity, when young, potentially underage girls danced provocatively around the pop star. That’s not even to mention the Super Bowl commercials themselves that use “titillating and salacious” marketing — though no one issues massive fines on those — the 12 page filing said.

Finally, the artist and her attorneys accused the NFL and NBC of negligence themselves in the incident, as the network did not use the possible five-second delay due to system failure. All told, the NFL now wants $16.6 million from M.I.A. and her team.