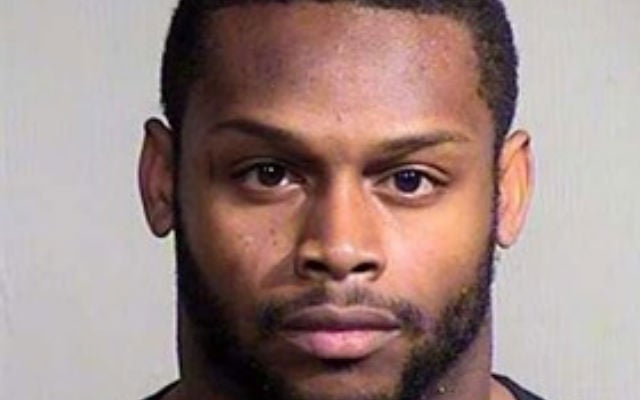 In a police report released Thursday, the Arizona Cardinals running back was accused of head-butting his 27-year-old wife and breaking her nose after she refused to have sex with him. Authorities say he punched her in the face the next day. He also punched walls and threw a shoe at his 17-month-old son, who was not injured, according to police.

He spent Wednesday night in jail before being released on a $25,000 cash bond early Thursday morning. While leaving the Maricopa County Jail in Arizona, Dwyer reportedly said he never hurt his son. He’s been ordered to have no contact with the alleged victims and he cannot travel outside the state of Arizona.

He need not worry about missing road games as Dwyer has been deactivated from all team activities. The NFL is set to review these incidents, this being the latest in a string of off-the-field player controversies that the league is facing right now.

As TheWrap previously reported, the NFL has received criticism following their handling of Baltimore Ravens player Ray Rice’s domestic violence case. Rice was originally suspended for two games after video emerged of him dragging his then-fiancee Janay Palmer out of an elevator. A second video surfaced in early September clearly showing Rice striking his wife. The Ravens then cut Rice and the league has suspended him indefinitely.

Minnesota Vikings running back Peterson sat out on Sunday’s game against the New England Patriots after being indicted on charges stemming from an injury his four-year-old son suffered. Peterson has since admitted to giving his child a “whooping.”

Dwyer, from Marietta, Georgia, was a sixth-round draft pick of the Pittsburgh Steelers out of Georgia Tech in 2010. He signed a signed a one-year, $795,000 contract with the Cardinals in March.