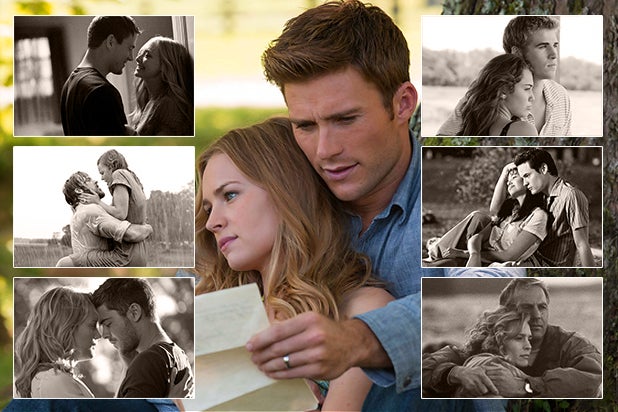 Nicholas Sparks is arguably one of the most successful crossover star in the film and publishing industries, prolific in churning out sweeping bodice rippers and offering them up for adaptation.

But more than his ability to find the intersection of earnest romance and socially acceptable sappiness, Sparks films are major vehicles for male and female movie stars. Would Mandy Moore and Shane Wast be nostalgia bait for millennials without “A Walk to Remember?”  Where else would Zac Efron try to cut his teeth as a romantic lead but “The Lucky One?”

Also Read: Ryan Gosling and Rachel McAdams Hated Each Other on the Set of ‘The Notebook’

“They were willing to take a chance,” Barry said of “Notebook” production company New Line in those early days. “Ryan had done a drama called ‘The Believer’ but wasn’t really known. Rachel was totally unknown.”

A famous audition tape of McAdams has long been in circulation on the internet, but what fans don’t know is “I’ve threatened to release the entire audition to the public. Rachel actually did three sessions, and you just saw how far she was willing to go,” Barry said.

And for good reason: The respective lead roles were nothing short of star-making for the pair. TheWrap takes a look at other profiles made or raised by the Sparks craze, in our power ranking of the biggest pairs of stars to have come out of all Nicholas Sparks adaptations so far.

11. A Walk to Remember (2002)
Shane West and Mandy Moore broke a million pre-teen hearts when “A Walk to Remember” became the first Nicholas Sparks movie to zero in on the YA crowd (before YA became the craze that it is today). It did launch Moore’s career – who had been a pop music star previous to this, her first starring acting role. But it’s been 12 years, and West and Moore seem settled into their respective careers – he’s on WGN’s “Salem” and she’s back to music – so barring some other career-defining event, they probably don’t have quite as much power as the other couples on the list currently.

10. Safe Haven (2013)
Josh Duhamel and Julianne Hough both rose to fame in very different mediums – he from the soap opera world and she as a dancer – but after middling results in other films, Sparks adaptaiton “Safe Haven” seemed to put the final coffin in their film careers rather than restart them. Duhamel is going back to TV as the star of CBS’ “Battle Creek,” and Hough is putting her dancing shoes back on, going on a stadium tour with her also-famous dancing brother, Derek.

9. The Best of Me (2014)
James Marsden and Michelle Monaghan are talented, beautiful and prolific actors, but don’t often get starring roles in high profile projects. Unfortunately, “The Best of Me” had the distinction of being the worst opening for a Sparks film ever, and isn’t going to do their careers any favors. But these two have more than proved their worth through years in the industry, and won’t be hurting for work anytime soon.

8. The Choice (2016)
“The Choice” doesn’t come out until 2016, but Benjamin Walker and Teresa Palmer are both rising stars who are poised for a breakout. If they hit the chemistry just right and the script and direction support their performances, no one could benefit more from a Sparks bump.

7. Nights in Rodanthe (2008)
In a bit of fantastic casting, this more mature Sparks love story – not utilized to tell a younger generation’s own tale – brought back together the stars of “Unfaithful,” a darker, more twisted take on love. Richard Gere and Diane Lane have charisma, acting prowess and star power, not to mention staying power. Two of our most enduring movie stars elevated the material and will continue to do so in their other projects.

6. Message in a Bottle (1999)
Robin Wright is literally the First Lady of streaming, given her Golden Globe-winning turn as Claire Underwood in Netflix’s “House of Cards.” While she’s historically been relegated to supporting roles, as was the case with “Message,” Wright has emerged as a true powerhouse for the digital content age. Kevin Costner is more of a perennial statesman in the movie industry but can still turn heads. In December, his race drama “Black or White” with Octavia Spencer proved he’s still capable of making interesting choices and still delivering high-caliber performances.

5. The Longest Ride (2015)
The newest Nicholas Sparks film in theaters, a quartet of young stars make up two couples who both feature prominently in the storyline. And all four are bona fide rising stars and at least two of them have lined up other high profile projects even if “The Longest Ride” doesn’t launch them to another level. Britt Robertson will have “Tomorrowland,” a nearly guaranteed hit, next month, while Scott Eastwood just landed a mystery role in comic book franchise “Suicide Squad.”

4. The Last Song (2010)
While Miley Cyrus has never been praised as the most versatile actress, this 2010 film centering on the individual romantic struggles of dysfunctional family lent the now-grown singer some studio legitimacy. It also introduced the world to her then-boyfriend, now movie star, Liam Hemsworth. Chris’ younger brother is currently the star of “The Hunger Games” franchise.

3. The Lucky One (2012)
“The Lucky One” didn’t do much for Zac Efron and Taylor Schilling on its own, but these two are doing just fine. His star was and continues to be on the rise, especially now that he’s found more of a niche in raucous comedies, and she’s charted an even more impressive career trajectory as the Emmy-nominated star of Netflix’s “Orange Is the New Black.”

2. The Notebook (2004)
There has never been a Sparks adaptation so successful at launching the careers of the young lovers at its center. Rachel McAdams was a complete unknown when she was cast opposite Ryan Gosling, who had just been an acclaimed indie actor before hitting the mainstream stratosphere in 2004. The fame-averse duo have never quite been able to shake the fascination with their lives and careers since. “The Notebook” also remains the highest-grossing Nicholas Sparks movie of all time, taking in $81 million at the box office.

1. Dear John (2010)
How could any Sparks movie but “The Notebook” be ranked No. 1? The power of Channing Tatum. The guy is one of the hottest movie stars on the planet right now, and is showing no signs of stopping anytime soon. Amanda Seyfried, too, continues to rack up the high profile leading lady roles in Hollywood. The two of them took “Dear John” to #1 when it opened in 2010, knocking “Avatar,” the highest-grossing movie of all time, off the top spot. It’s hard to imagine any Nicholas Sparks couple being more powerful than these two right now.