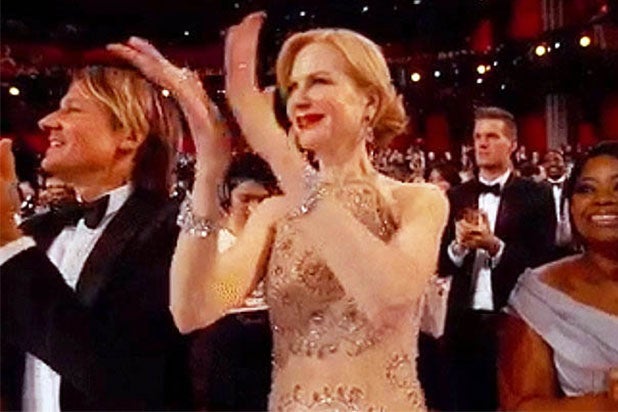 Nicole Kidman got some attention for her bizarre clapping at the 2017 Oscars last month, but according to the actress, there’s a reason she had to applaud like a seal.

During an interview on Australia’s “Kyle and Jackie O” radio show on Thursday, the “Lion” actress said her jewels prevented her from clapping normally.

“It was really awkward,” she said. “I was like, ‘I wanna clap, I don’t wanna not be clapping.’ That’d be worse, right? Like, ‘Why isn’t Nicole clapping?'”

Kidman continued, “So therefore I’m clapping but it was really difficult because I had a huge ring on that was not my own — but it was absolutely gorgeous — and I was terrified of damaging it.”

Kidman also talked about the moment “La La Land” was erroneously crowned the winner of Best Picture although “Moonlight” had actually won.

“That was bizarre I have to say. I wasn’t sure what was going on. No one in the audience was,” she shared. “Then there was some shuffling and envelopes and I’m thinking, ‘What is going on?'”

At the time, she thought it was some sort of medical emergency: “I thought someone wasn’t well. And then I saw people’s faces dropping. It was bizarre.”

Watch a video of Kidman’s weird clapping below.

On Oscars night, her clapping prompted comparisons to a seal on Twitter:

Little known fact about Nicole Kidman – she is in fact half sea lion pic.twitter.com/42Eos1YHkZ

Anyone see Nicole Kidman clapping? She claps like a seal. Awesome. #Oscars