The Hollywood Reporter is changing hands. Editor & Publisher is going under. And Lachlan Murdoch has nothing to do with it. 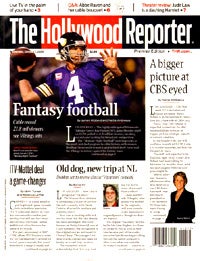 Financial terms of the deal were not disclosed, but according to one source, the price was said to be in the $70 million to $75 million range.

News Corp. owner Rupert Murdoch’s son Lachlan, who had been seeking to join the consortium, apparently pulled out.

It was widely believed that Murdoch was in the early stages of building his own mini-media empire, but he plans instead to focus managing his stake in DMG Radio Australia, in which he invested more than $100 million last month, acquiring a 50 percent stake, according to an M&A insider. "It’s weird to say, but radio isn’t as risky as magazines," the person said.

To take his place, in the deal, Alan Schwartz, former chief of Bear Stearns, now at Guggenheim, stepped in as an 11th hour backer.

Finkelstein, who will become chairman of the new company, declined TheWrap’s request for an interview.

In a statement, he said: "These are unique brands that are already leaders in their respective fields and, with the additional financial and strategic resources that we will provide, they will be positioned to add enhanced content across their print, online and new media channels and to continue to deliver value to their subscribers and advertisers.”

It’s unclear what plans Finkelstein, who owns News Communications “Who’s Who” publications and the Washington, D.C.-based trade The Hill, has in store for his newly-acquired magazines.

It has been a brutal year in magazine publishing, and for business-to-business trades in general.

The Reporter, in particular, has suffered huge fall-offs in revenue, readership and even online followers. The once-flush operation has also seen successive staff cutbacks. According to several reports, THR has been seriously considering abandoning its print version altogether.

The Wrap first broke the news of the impending sale to Finkelstein last month, as well as the news that the Hollywood Reporter was on the block more than a year ago.

In a surprise move, Nielsen also announced that it will fold a pair of magazines not included in the deal: the 108-year-old Editor & Publisher and 76-year-old Kirkus Reviews.

Staffers at E&P were stunned by the decision. Nielsen was said to have been searching for a buyer for the titles, but finding one proved elusive.

"I’m shocked that a way was not found for the magazine to continue some form," said Greg Mitchell, editor since 2002, "and remain hopeful that this may still occur." (Alan Meckler, CEO WebMediaBrands and owner of Mediabistro, said on Thursday that he had offered to "take the publication off Nielsen’s hands" several months ago, but that the company spurned his offer, "claiming it could receive ‘millions’ for the title.")

“This move will allow us to strengthen investment in our core businesses – those parts of our portfolio that have the greatest potential for growth – and ensure our long-term success,” Nielsen Business Media president Greg Farrar wrote in a memo to staffers. “We remain committed to building our trade show group and affiliated brands.

Farrar added: "These assets continue to be a key part of The Nielsen Company’s overall portfolio and we strongly believe they are positioned to grow as the economy recovers. In addition, we’ll continue to assess the strategic fit of our remaining portfolio of publications.”

Thursday’s sale draws to a close more than yearlong search for a buyer for the Nielsen Business titles, with many investments groups said to have kicked the tires on the portfolio, only to walk away.

Nielsen and e5 did say that the magazines will continue to operate in their current locations at 770 Broadway in New York and at 5055 Wilshire in Los Angeles after the transaction closes. The deal is expected to be completed by the end of 2009.