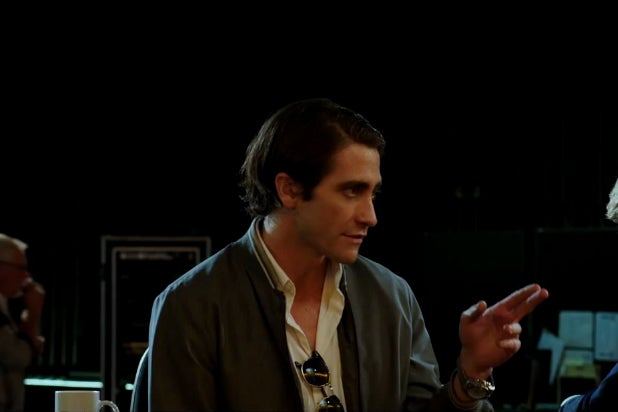 In 2009, Brazilian TV host Wallace Souza made international headlines when he was charged with arranging the deaths of five people in an effort to gin up ratings. Souza hired contract killers, the police alleged, then tipped off camera crews so that the latter would arrive at the crime scene before law enforcement. Graphic footage of the slayings later ended up on Souza’s controversial news program.

It’s not that reporters and cameramen necessarily want to be monsters, but their business, as the film sees it, is to profit off the misery of others. In its smartest and eeriest detail, “Nightcrawler” gives star Jake Gyllenhaal only cheery corporate pep talk for dialogue. His dead-eyed Louis Bloom could be a sample cover letter manifest in human form; he only ever speaks of opportunities, solutions, best practices, and taking things to the next level.

When his exploited employee Rick (a squandered Riz Ahmed, “Four Lions”) yelps that Louis is driving too fast in his pursuit to be the first camera crew at a crime scene, the entrepreneurial videographer responds only with a meaningless acronym: FEAR is False Evidence Appearing Real.

Louis finds his calling when he witnesses a young woman being saved from a burning car by highway patrolmen. It’s not the brave heroes who catch his admiration, but the guy getting in the way of the rescue: a man with a camcorder who’ll sell the tape to a local station for a few hundred bucks. Louis buys a camera and a police scanner the next day, hires the homeless Rick as his “intern” for far below minimum wage, and zips all around LA (it’s impossible not to play spot-the-block if you’re an Angeleno) in search of grisly destruction.

As Louis would say, love what you do and do what you love.

The rest is a fairly predictable, but somehow still shocking, portrait of a sociopath’s self-actualization. Gilroy ramps up the suspense while mining pearls of black humor as Louis becomes bolder in his quest for bigger paychecks and increasingly voyeuristic images. He trespasses into victims’ homes, repositions dead bodies, and leans in for close-ups, the bloodier the better.

Louis’ capitalist spirit is encouraged by a desperate-for-ratings news manager struggling to get to the second rung of her career ladder. Nina (Rene Russo, who’s married to Gilroy) soon finds reasons to regret mentoring Louis, who attempts to seduce the older woman in a can’t-swallow-too-creepy ultra-neg-a-thon that would make even Mystery need a shower after.

The dramatic weight loss Gyllenhaal endured for the role, which transforms his dreamboat looks into a bat-like mask, is startling. But the actor’s performance is just as impressive, nimbly selling Gilroy’s occasionally overwritten lines while Louis’ punishing optimism finds new gradations of sadism and rage. “Nightcrawler” is the arrival of a thrilling character actor.

What Nina wants to show on the news every night — “a screaming woman running down the street with her throat cut” — is no longer scary, but just another spectacle for casual media consumption. That there’s no ceiling to Louis’ ambition and no moral bottom to his tabloid instincts (or ours): now that’s terrifying.