Thursday was like Christmas: I woke up extra early, in eager anticipation of the moment I’ve been waiting for. That’s right folks, it’s Emmy time, and Santa brought us nominations this morning.

As usual, there were some obvious choices, some shockers and some head-scratchers. And there’s only one way I can express my feelings on this year’s batch of nominations. To unleash my fury, it’s time for me to bring back a feature popularized by my TV column in The Aquinian: Nod of the Head, Shake of the Fist!

(Disclaimer: For the record this writer denies any similarities between this segment and the one from a certain late-night report host. A wag of my finger to those who don’t buy it!)

First up, let’s take a look at the Outstanding Reality Competition Program category. There are the usual suspects: "American Idol," "Dancing With the Stars" and, of course, the unbeatable "The Amazing Race." However, I give a shake of the fist to the unjustifiable omission of "Survivor: Heroes vs. Villains." How could this season be overlooked? It was among one of the best ever. Was this a plot to screw over Russell Hantz once again? Not to mention this season of "American Idol" was widely hated, and yet still gets nominated. Of course, "The Amazing Race" will walk away with the Emmy again this year, as it has for all seven years of the category's existence.

Next up, there was a category that screamed justice. No, not the short-lived legal drama “Justice” — I mean justice on this earth. In the category of Outstanding Variety, Music or Comedy Series, NBC submitted "The Tonight Show" … twice! Once for Jay Leno, and once for Conan O’Brien. I mean, why wouldn’t they submit Conan too, after screwing him over — it only makes sense, right?

Well folks, this morning, justice walked into the building. I give a huge nod of the head for "The Tonight Show With Conan O’Brien" getting the nomination, and Jay Leno getting the snub. It was like justice and karma made sweet love and had a baby that was this nomination. And can it be any clearer for NBC which side are people on? First "The Jay Leno Show" flopping, then the “I’m With Coco” campaign, then the lowest ratings in a long time for "The Tonight Show With Jay Leno," and now this. Conan O’Brien faces off against Jon Stewart and Stephen Colbert in a race impossible to predict. But can you imagine Conan’s acceptance speech, which will be on NBC, if he wins?

Moving on to the Supporting Actress in a Comedy category, a nod of the head goes to the obvious nomination of Jane Lynch. Let’s face it; from the pilot episode of "Glee" on, she had the nomination in the bag. I commented on Twitter this past week wondering if she would accept her award as Sue Sylvester if she wins. Sure, it’s not likely and it's wishful thinking, but it would be hilarious. She faces off against two deserving "Modern Family" actresses, among others, which makes for a tight race.

However, a shake of the fist goes to the omission of the highly underrated Merritt Wever of "Nurse Jackie." Her character, Zoey, is a fan favorite, and this past season Wever delivered one hell of a performance. Edie Falco is the MVP of the Showtime series, but Wever is a close second. What makes this omission more painful is seeing anything from "Two and a Half Men" up there.

Next, a nod of the head goes to the "Lost" love. It’s not one of my favorite shows, but I will admit it deserved a proper send-off. The series got top nominations for Matthew Fox, Terry O’Quinn and Michael Emerson, and of course a nomination for Best Drama.

But if there was one show that deserved the proper send-off, it was "Law & Order." A shake of the fist for not giving the 20-year-old series one last shot. Not to mention the series was on top of its game. I understand the Best Drama category is crowded, but come on! 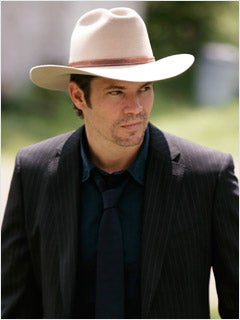 Speaking of omissions in Outstanding Drama Series, I have not one but TWO more shakes of the fists. The HBO series "Treme" and the FX series "Justified" both were left out of every major category, and that’s a huge injustice. As much as I like "True Blood," it did not deserve the nomination this year over "Treme" and "Justified." Same question mark goes to "The Good Wife." Yes, great show, but more Emmy-worthy than "Treme" and "Justified"? I'm not convinced.

Switching gears to Outstanding Comedy Series, a nod of the head goes to two newcomers making it big this year. Both "Modern Family" and "Glee" were huge during its first year, and got well-deserved Emmy nominations. In my mind, it will come down to these two.

But who will take it? My heart wants "Modern Family" to win. I watched both shows, and both are good in their way, but "Modern Family" was more consistent this season. I also want "Modern Family" to get the recognition it deserves after being swept by "Glee" at the Golden Globes. However, my head says "Glee" probably will win. The series definitely took the TV world by storm and was constantly one of the most talked-about shows. If "Glee" does win this year, "Modern Family" will next year.

Finally, the Outstanding Lead Actor in a Drama category. As a huge "House" fan it pains me to say this, but a shake of the fist goes to Hugh Laurie’s nomination. Let me explain. Laurie is brilliant, without a doubt, and we know that. But this season was not Emmy-worthy; in fact, it was quite the opposite. If Laurie deserved the nomination this year, it would be only for his performance in the season premiere and the season finale. And that’s not enough. Especially with the omission of "Justified" star Timothy Olyphant (or his hat). Hopefully "House" improves next year, stat!

This category is all about the tight race between "Dexter" star Michael C. Hall and "Breaking Bad" star Bryan Cranston. Choosing who will win has kept me up nights. (Seriously — this is what I do for my readers!) But if I had to pick, I would say that Michael C. Hall wins this year. After Cranston winning two years in a row, this year belongs to Hall. And he gets a huge assist from John Lithgow as the Trinity Killer this past season on "Dexter." With Lithgow, Hall raised his game. He also did it under tough circumstances, while battling cancer. Come on,Emmy people, we know Cranston was brilliant on "Breaking Bad," but this year belongs to Michael C. Hall.

Well folks, after dishing out all that fury, I’m exhausted. It’s time to refill my coffee. But TVDoneWright isn't done with Emmy coverage yet! Check back for the details of this year’s Emmy Challenge in the next few days.

Adam Wright has two goals as a writer: first to entertain, second to inform. He is a journalism student at St. Thomas University in Fredericton, New Brunswick, Canada. He loves TV, and has been the TV columnist for campus newspaper The Aquinian for more than three years. In April 2009, he launched TVDoneWright.com, offering news and opinions about television.
x
Looks like you're enjoying reading