TheWrap awards magazine: Joshua James Richards talks about the pain and ecstasy of filming Chloé Zhao’s remarkable feature about a woman living a nomadic life in the American West

A version of this story about “Nomadland” appears in the Oscar Nominations Preview issue of TheWrap’s awards magazine.

Cinematographer Joshua James Richards, an awards magnet for his gorgeous orangey work on “Nomandland,” has spent most of his career out in the real, rural world. His credits include three features with “Nomadland” director (and his partner in life), Chloé Zhao, all made in the American West or Midwest, where scorpions dance maniacally along the desert floor. (More on that below.)

And sometimes, while working long days in cold, harsh conditions, even something as benign as a light source can be amusing. While filming “Nomadland,” Richards was operating the camera and filming Frances McDormand, playing the main character, Fern, as she rearranged items in the Ford van that is also her home. The scene required more glow, and he attached a tiny LED penlight to the camera. Richards glanced at Zhao, who was standing at the monitor beside filmmaker Joel Coen, McDormand’s husband, who was visiting for the day.

Pointing at the little penlight, the cinematographer laughed. “Look, Joel,” he said, “we’re pulling out all the stops on this film. No expense spared!”

Richards’s sarcasm is buoyed by the fact that practically all of “Nomadland” was filmed using natural or existing light. It’s an ethos that Zhao and Richards have drawn from their previous features “Songs My Brothers Taught Me” and “The Rider.” Richards also shot Francis Lee’s 2017 drama “God’s Own Country.” (He’s a camera operator on Zhao’s upcoming Marvel superhero feature “Eternals,” due in November.)

“Chloé was born and raised in Beijing and I’m from a fishing town called Penzance in the south of England,” Richards said. “We left our home countries and tried to make it as filmmakers. I was 200 grand in debt and had no backup plan. So in a way, I think that explained why we’re both fascinated by the American West. It stirs our imaginations. When it comes to the landscape, you feel it before you understand it.”

The film follows about a year in Fern’s nomadic life on the road. Richards revealed that both he and Zhao, who moved to Colorado together after graduating from NYU, identified with the film’s protagonist.

“Chloé had been talking about alternative way of living, like in a van, for years,” he said. “Obsessively, actually. And the film ticks so many boxes for me too, just as it related to the idea of the human will. The image of this fragile women in the twilight of her life. Yet she continues to discover herself. I can relate to that.”

As with her other films, Zhao hired mostly real-life people for the cast. Richards explained the importance of gaining the trust of nonprofessional actors. “We shoot with quite a wide angle lens and the camera is inches from your face,” he said. “So I’m trying to be invisible, but that’s only possible from the months previous, where they have gotten comfortable with me. It’s a testament to the environment Chloé creates.”

That environment and Zhao’s intimate technique is most evident in one touching moment, when Fern is speaking to her friend Swankie, who opens up about a cancer diagnosis. The sad revelation then leads to a humane,  unforgettable monologue from Swankie about the adventures she’s been privileged to experience in her life. It was filmed by Richards in a precisely framed and sustained close-up.

I told Richards that Swankie deserves an Oscar nomination for that scene. “I think so too, man,” he replied. “You know, some people’s behavior changes when they’re being observed, so we wanted Swankie to feel like she was collaborating in a kind of community theater, rather getting the third degree from a filmmaker. It meant that she was able, even with a camera lens inches from her face, present the most accurate version of herself. It’s beautiful.” 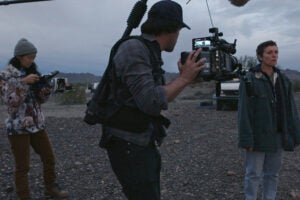 The filming of “Nomadland” took the crew to five different states, including the forests of Northern California, the Badlands of South Dakota and the Arizonan desert. Richards was having a beer one night with Derek Endres, a train hopper from Wisconsin who plays himself in the film, when the cinematographer lost a brief battle with an eight-legged arachnid.

“Yeah, Derek was teaching me how to open a beer bottle with my teeth, and a scorpion got me right on the elbow,” he said with a self-deprecating laugh. “My arm swelled up all big for a few days and I was operating the camera in quite a lot of pain, but that’s the way it goes sometimes.”

Also Read: Frances McDormand Will 'See You Down the Road' in Hopeful New 'Nomadland' Trailer (Video)

Richards also contracted “the Crud,” a flu-like illness which stands for Common Respiratory Unknown Disease. His symptoms included headache, sore throat, and “a cough that I just couldn’t shake,” he said. “I have so many great memories from working on ‘Nomadland,” but the Crud almost broke me.”

In between coughing fits, Richards took advantage of magic hour, the golden time before sunset used by filmmakers for its cinematic beauty. But he has a unique perspective on magic hour’s meaning in the film.

“It’s very pretty, of course, but it also represents the end of something. The film is about human dignity, seen through this woman who’s lost everything society says makes her who she is. So there were always specific reasons why we shot at that time. It wasn’t to make the movie pretty.”

In that goal, Richards and Zhao found a kindred spirit in McDormand. Richards recalled his excitement when McDormand mentioned that she wanted to ground her character in film history. “Her short hair was a deliberate homage to ‘The Passion of Joan of Ark,’ the Carl Theodor Dreyer silent film. We talked about Buster Keaton and Chaplin too. She wears the same coat through the whole film. Fran wanted the coat a few sizes too big. The iconic in simplicity, just like Chaplin. This woman with a little bird-like haircut and a little lamp.”

Though “Nomadland” is favored to reap Oscar nominations in many categories, Best Makeup and Hairstyling will not be one of them. “With Frances, there were no cosmetics allowed,” Richards said. “What she does is so delicate and Fern is so mysterious, and so you look at Fran as Fern and you can see the character written all over her face.”

He added, “It’s an amazing view, man. Getting to explore the national park that is Frances McDormand’s face will remain one of the privileges of my career.”