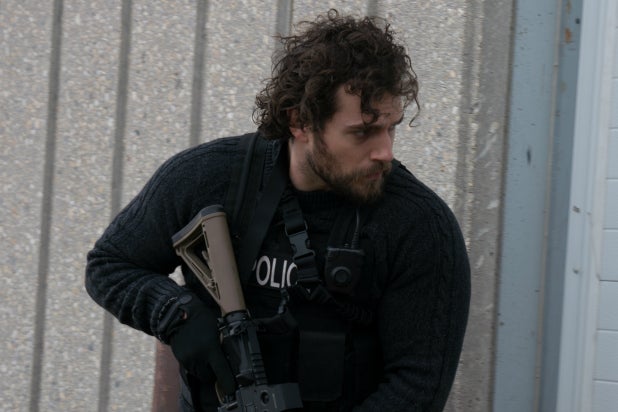 Sexual assault may be a point of intense, eye-opening conversation in the country right now, but it’s also still the bread and butter of exploitative junk like “Nomis,” writer-director David Raymond’s debut feature starring Henry Cavill as a brooding Minnesota-by-way-of-the-UK cop on the hunt for a powerful, elusive, serial kidnapper-rapist-murderer.

Jittery and nonsensical, it juggles its influences — “The Silence of the Lambs,” “Seven,” television procedurals — with oily hands and a distracted focus.

Opening with a nervy nighttime chase through snowy woods in which a crying, barely-clad young woman is running from something hellish, and followed by a domestic exchange in which Cavill’s divorced dad lawman schools his online-addicted 13-year-old daughter (Emma Tremblay, “Supergirl”) in how to tell who might be a social-media-finessing creep (no friends in the photos), the movie primes us to believe “Nomis” might be an engaged thriller for our distressed but increasingly awakened times.

That feeling is quickly dispelled, however, by an over-the-top sequence in which a stereotypically lascivious would-be creep thinks he’s about to bed a performatively innocent young thing (Eliana Jones, “Hemlock Grove”). In reality, he’s fallen into a motel-room trap, “To Catch a Predator”-style, laid by Jones’ character, in reality a tough avenger, and Sir Ben Kingsley’s retired judge Cooper, who wields a bat, handcuffs and tech savviness. Punishment from these two isn’t exposure or arrest; it’s doctor-assisted castration and blackmailed restitution to the mark’s prior victims.

The head-fake to vengeance craziness is jarring, to be sure, but it also carries the whiff of something promisingly entertaining, albeit more disreputable and cathartic. But even this is not enough for Raymond, who then sends Cavill’s righteous crimefighter into a secluded manor to rescue kidnapped girls being held by a childishly manic, mentally unstable character named Simon, played by Brendan Fletcher in a performance that can charitably be labeled “uncontained.”

At first, the department’s eager, newly trained profiler (Alexandra Daddario) sees in their big arrest a tantalizing subject for psychological scrutiny, but she’s at odds with the results-oriented police commissioner (Stanley Tucci, collecting a paycheck for exasperation rendered), who just wants a completed case.

As if all that weren’t plenty to fill any crime movie’s plate, Raymond lades on more by indicating Simon isn’t working alone, something we figure out faster than the police do thanks to Fletcher’s spitting, raving turn. Now we have the trope of the mysterious, game-playing string-puller (and who it might be), but wait, there’s more! When taciturn Cavill and hotheaded Kingsley are forced into an uneasy alliance — One likes the law! The other rejects it! — we get the cowboy-opposites trope, as well.

As “Nomis” steps up the pace like a runner losing balance and falling forward, the clichés pile up and plot points fly at us more like insecure stabs at holding our interest than naturally edgy developments. At times Raymond’s cross-cutting is inexplicably confusing, suggesting connections between characters that aren’t real, and jerking us out of newly established tension to set up more concurrent danger.

The effect of all the chaotic editing isn’t just diluted suspense, but also an almost laughable performance incoherency across many characters; at times Cavill is all stoic watchfulness, or all man of action, while Daddario goes from a professionally sensitive interrogator to a tauntingly abusive one with head-spinning speed. And why Nathan Fillion is in the movie, hovering around the edges of the investigative team before disappearing completely, is perhaps the film’s biggest mystery.

Most regrettable is the waste of a resonant subject matter (sex crimes) that for too long has been an excuse in movies for jolts of bad behavior and sensationalized misogyny, when what we need more of are good-faith attempts to illuminate this scourge while still satisfying our need for riveting entertainment. For every well-intended date-night nail-biter like “The Accused” or “The Girl With the Dragon Tattoo,” there are a million forgettable efforts like “Nomis,” which in its restless expediency more closely resembles a protracted episode of psycho-of-the-week TV filler like “Criminal Minds” or a late-night cable/streaming time-waster.

“Nomis” is much more comfortable with attractive women seen as vulnerable pawns so the many bullish male figures can be take-charge heroes, and that kind of retrograde damsel mindset is ultimately more dispiriting in a movie like this than any eye-roll-worthy twist or sloppy thriller mechanics.