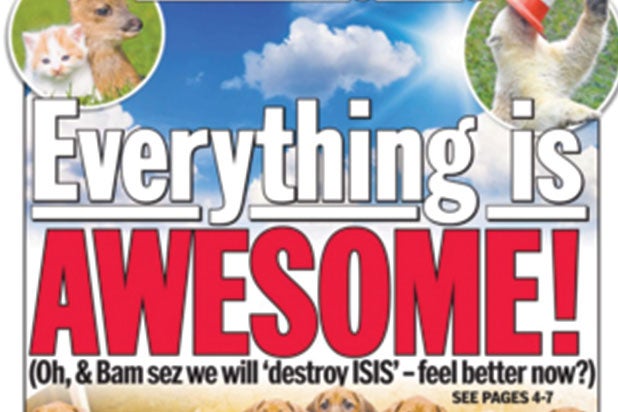 The New York Daily News has run a cover featuring puppies and kittens in response to the backlash the paper has faced after running controversial front pages on the San Bernardino shooting.

The publication explains its sarcastic front page on the cover as well: “To all those who have been offended by hearing the truth about our nation’s gun scourge & the NRA & cowardly pols who think nothing’s wrong.”

Last week, the Daily News made headlines when it ran a cover that blasted Republicans for “offering prayers — not solutions on gun control — after San Bernardino massacre.” The headline for that front page was “God Isn’t Fixing This.”

It followed up with a cover that called National Rifle Association vice president Wayne LaPierre “a terrorist.”

See the new cover below.

An early look at tomorrow's front page: EVERYTHING IS AWESOME! https://t.co/mYPHNLJALZ pic.twitter.com/fPsKSfPDBn