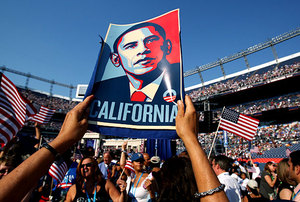 He stayed in the bedroom, clicking on French television while the first African-American to seriously contest the U.S. presidency accepted the nomination of the Democratic Party before a throbbing wall of humanity in Invesco Field.

“This moment, this election, is our chance to keep the American promise alive,” Obama said, on the 45th anniversary of Martin Luther King’s speech about his own lofty dreams.

Me, I like Obama. How can I not? He’s likeable. He’s intelligent. Articulate. Empathic. Optimistic.

Listening to him, it is possible – even just for a second or two – to leave behind the cynicism of our life experience. To embrace his belief, secretly our own, that as a country we can change. That as individuals we can grow and improve and collectively become a better society. That despite the obvious – that we are a deeply divided nation — we can find common ground.

My husband doesn’t want to hear it. Which is kind of crazy. An immigrant to this country and a political junkie, my husband finally took the oath of American citizenship two years ago so that he could vote. This will be his first presidential election as a U.S. citizen, and yet he has sworn – since Hillary fell out of the running — that he is going to sit it out. He will not vote for Obama, and he can’t support John McCain and the party of a failed administration.

Obama, my husband says, is a politician. A gifted orator. And the world is a hazardous place. Tonight he was offended by the spectacle of a mass, staged political event, a stadium packed with 80,000 people screaming the name of their new leader.  As a European, he’s seen such sights before.

“It’s manipulation,” he called out from the other room, disgusted. “It’s banal.”

I thought about this. I had found Obama’s speech moving. “All across America, something is stirring,” the candidate said. “What was lost in the past eight years was our sense of common purpose.” Now is the time, he said, to reclaim it.

In his speech, Obama denounced cynicism. He rejected “the same old politics” and its players. He dared to suggest that those who oppose abortion and those who support the right to choose can find things to agree about. That hunters in rural Ohio and those who fight gang-bangers in urban Cleveland can concur on banning automatic weapons.

He argued passionately for moderation. Would I have felt differently if the pulsing waves of people visible all the way up to the bleachers were cheering a different political message? Or a religious one? Would I have felt fearful, instead of moved?

I was struck nonetheless by the unlikelihood of it all. Here’s a candidate close to my own age, vastly inexperienced for so weighty a position. In the moment, his argument is stirring. He conjures a vision that we yearn to grasp, a vision of change. Change is scary to most people. It is so much easier to choose the familiar, even when the familiar is not desirable.

But my husband, whose political instincts are finely honed, does not trust the message, or the man. He has believed before, and been disappointed. Barack Obama, he says, wants to be the president more than anything else, and his words are tailored to that goal. "This election has never been about me. It’s about you," said Obama tonight. That’s a good line, observed my husband, wryly.

Maybe he does. If so, do we dare believe it too?