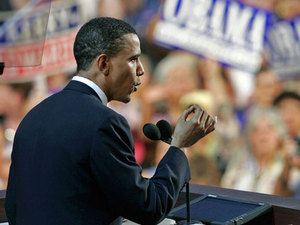 When Barack Obama mounts the shimmering blue stage at the Pepsi Center on Thursday night, he’ll be trailed by a film crew, one of six or seven cameras that are following his every step in Denver for a feature-length documentary about his historic journey. With two years of behind-the-scenes access to the candidate the film, co-produced by Edward Norton and directed by Amy Rice and Alicia Sams, may turn out to be a uniquely historic account.

HBO seems to agree. The cable channel is poised to acquire the still-in-progress documentary, according to individuals on both sides of the deal. A movie studio may also buy theatrical rights, I’m told.

The crew has spent Thanksgiving at the Obamas’ home, has been backstage at every major campaign speech, traveled with the candidate to Kenya, and conducted lengthy interviews with Michelle Obama, speechwriters and other key staff. But a key component of the crew’s access has been its agreement not to release anything before the election.

That’s fine by the filmmakers, said Norton. “We’re very much taking a non-partisan approach,” he said. “It is not in any way a laudatory or partisan angle on him. It’s not a campaign film. Our angle is we wanted to document for the historic record as intimate a portrait as possible of the first major African-American candidate for president.”

Norton admitted, however, that the Obama machine has frustrated the filmmakers in restricting access at key moments. I asked if there was footage from the tense days around the Rev. Wright affair. Norton said: “No one in their right mind will put their toughest moments on film. We hope to get a few of them. But we’re sticking to the mission statement, which is to reveal the country through his candidacy, as much as to reveal him.”

The filmmakers aim to complete and release the film within the first 100 days of an eventual Obama presidency.

At least one other Obama documentary, this one with no special access to the candidate, is complete. “Hype: The Obama Effect” was made by the pro-Republican group, Citizens United Productions, and debuted at a Denver theater on Sunday. It will also screen next Wednesday in Minneapolis, before heading to a limited theatrical release and DVD sales. The film focuses on what it considers Obama’s weakness – how dazzling he has been to those around him, based on little substance.

A trailer on Youtube features a clip of Obama dancing with Ellen De Generes (subliminal message: She’s Gay!) and bits of the interviews conducted for the film with the likes of Tucker Carlson and Dick Morris. “There’s a void when it comes to conservative filmmaking,” said a spokesman for the group, Will Holley. “There’s a market there. By virtue of being the only ones, we are the leaders.”