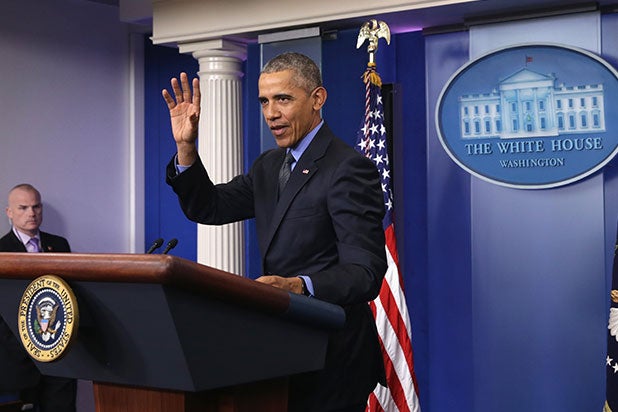 Even President Barack Obama can’t escape the hype of “Star Wars: The Force Awakens,” having ended a press conference because he needed to run and catch a screening of the film.

“OK everybody, I got to get to ‘Star Wars,'” the president said at the close of his year-end news conference, during which he spoke about the budget just passed by Congress, terrorism and his goals for the upcoming year.

First Lady Michelle Obama was hosting a screening of “Star Wars: The Force Awakens” at the White House’s private theater for Gold Star families and children, founded by individuals who lost family in the Iraq War. The screening was part of the Joining Forces Initiative.

Also Read: Watch 'Star Wars' Fans in Costume and Out of Their Minds on Opening Night (Exclusive Video)

Even Josh Earnest, the White House Press Secretary, took the stage with stormtroopers at the podium.

The film debuted Thursday night with a record-breaking $57 million, which puts it on course Friday to become the first movie ever to make $100 million in a single day. Fan support has been strong, with many camping out two weeks before its premiere at Hollywood Boulevard’s TCL Chinese Theatre, and advance tickets selling out back in October.

See he President’s sign-off below.