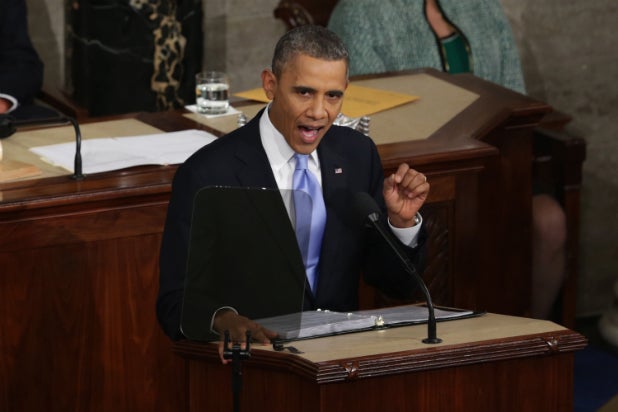 President Obama likened the gender pay gap and other anti-women workplace realities to antiquated policies more suited for an episode of AMC’s “Mad Men,” in Tuesday’s State of the Union address.

“Today, women make up about half our workforce. But they still make 77 cents for every dollar a man earns. That is wrong, and in 2014, it’s an embarrassment,” Obama said.

“A woman deserves equal pay for equal work. She deserves to have a baby without sacrificing her job … It’s time to do away with workplace policies that belong in a ‘Mad Men’ episode.”

The president said that thanks to the Affordable Care Act, women no longer have to pay more for health insurance simply because of their gender. It was a wide-ranging speech that also tackled the nation’s sluggish economic recovery, an increase of the minimum wage and diplomatic relations with Iran.

Obama also said in no uncertain terms that climate change is real, and it’s time for Americans to change their behaviors to combat it.

“Climate change is a fact,” the president said.

He referred to natural gas as an energy option that has “less of the carbon pollution that causes climate change,” firmer language than has been used in the past, and said climate change is the reason for the drought that is currently plaguing Hollywood and the rest of California.

In the Republican response, Washington Rep. Cathy McMorris Rodgers celebrated the fact that she was the 200th woman to be sworn in to the House of Representatives. She is also a new mom who didn’t sacrifice her job — McMorris Rodgers said in prepared remarks that she gave birth to a son with Down syndrome just eight weeks ago.

The congresswoman said that contrary to Obama’s assertions, women are paying more for health care now because of the Affordable Care Act.

“Not long ago I got a letter from Bette in Spokane, who hoped the President’s health care law would save her money — but found out instead that her premiums were going up nearly $700 a month,” she said.

Editor’s note: Clips of the State of the Union address will be posted as soon as they are available.