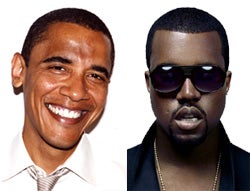 The Obama-Kanye-Jackass-Twittergate is not going away as fast as some might’ve hoped. As this made-for-meta-media story enters its third day, I thought it might be helpful to put together a quick recap for those of you who aren’t refreshing your Tweet-streams every five seconds:

On Sunday … well, we all know what Kanye West did.

On Monday, during a pre-interview chat with CNBC’s John Harwood before taping, President Obama called West a “jackass.” Terry Moran, a former White House correspondent at ABC News – which shares fiber optic cable with CNBC – and a few other colleagues heard the remark, and, of course, Tweeted about it:

Harwood later said he did not have an explicit agreement with the president to keep the remark off-the-record. But, as the Associated Press pointed out, so-called “open mic” chatter caught on tape before an interview starts in earnest is generally considered not for broadcast.

Within the hour, ABC News had the Tweet – and others – deleted. The network then apologized to the White House and CNBC.

On Tuesday, the remark, the Tweet and the reaction to this crazy journalistic ethics breach were debated heavily. TMZ obtained an audio clip of the president’s “Jackass” crack – replete with unidentified cackling – and posted it on its website.

Then on Wednesday, video of the CNBC interview surfaced, first posted by Politico.com and then, like Moran’s now-infamous Tweet, was promptly taken down by the site.

"We just felt upon reflection that it was more respectful to a fellow news-gathering operation to take it down," Politico managing editor Bill Nichols wrote. "We had no complaints from ABC, CNBC, the White House or anyone else."

But later on Wednesday, CNN – of all things – decided to broadcast the Politico-sourced clip:

So there you go. Note that it was Harwood who was, in fact, the unidentified cackler.

Personally, I preferred the Obama/Kanye YouTube mashup from Sunday: