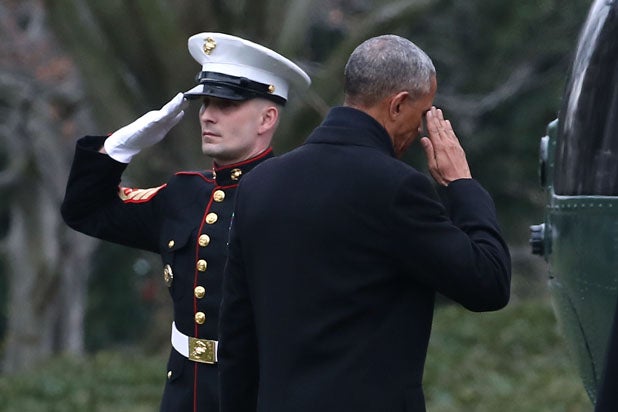 Exactly 2,989 days after he addressed thousands of supporters in Chicago’s Grant Park on election night in 2008, President Barack Obama returned to the Windy City on Tuesday to give his farewell address to the nation.

The speech, which began at 9 p.m. ET., comes as President-elect Donald Trump is working with Republicans to repeal the Affordable Care Act, Obama’s signature healthcare achievement.

“I first came to Chicago when I was in my early 20s, still trying to figure out who I was, still searching for a purpose to my life,” Obama told a crowd of supporters in Chicago’s McCormick Place convention center. “This is where I learned that change only happens when ordinary people get involved, get engaged, and come together to demand it.”

“After eight years as your President, I still believe that,” Obama said. “And it’s not just my belief. It’s the beating heart of our American idea — our bold experiment in self-government.”

As he delivered his speech, the crowd began chanting, “Four more years!” to which Obama said, “I can’t do that.”

Obama went on to insist that “in 10 days the world will witness the hallmark of our democracy. The peaceful transfer of power from one freely elected president to another.”

Some boos could be heard from the audience. Obama quickly shut down the interruption before adding that he expects the “smoothest possible transition” adding “just as President Bush did for me.”

Obama noted that the economy is rising as “poverty has fallen,” that the unemployment rate is at a 10-year low and that the “uninsured rate has never been lower.”

The outgoing president also took a thinly veiled shot at President-Elect Donald Trump, telling the crowd that “our progress has been uneven” and that “for every two steps forward” sometimes the nation takes “a few steps back.”

Obama also touched on education, better wages, social safety nets and equality. “We can argue about how best to achieve these goals but we can’t be complacent about the goals themselves,” he said.

“There is a second threat to a democracy,” Obama said, adding that he’s lived “long enough to know that race rations are better than they were 10 or 20 or 30 years ago, no matter what folks say.”

“We’re not where we need to be and all of us have work to do,” he said.

The president then quoted what he called the advice of “a great character in American fiction, Atticus Finch, who said, ‘You never really understand a person until you consider things from his point of view.'”

The president also gave a nod to the LGBT community twice, once mentioning Stonewall, a symbol of the gay liberation movement and later including transgender people as part of the minorities who should demand “equal treatment that our founders promised.”

He reminded the audience to embrace immigrants and stand up against bigotry. “Regardless of the station that we occupy we have to try harder,” the president said.

Obama also touched on the heated debate on climate change.

“In just eight years, we’ve halved our dependence on foreign oil, doubled our renewable energy, and led the world to an agreement that has the promise to save this planet,” Obama said. “But without bolder action, our children won’t have time to debate the existence of climate change; they’ll be busy dealing with its effects: environmental disasters, economic disruptions, and waves of climate refugees seeking sanctuary.”

Obama also warned about the “violent fanatics who claim to speak for Islam” and more recently “autocrats in foreign capitals who see free markets, open democracies, and civil society itself as a threat to their power.”

“The peril each poses to our democracy is more far-reaching than a car bomb or a missile,” Obama said, promising that “ISIL will be destroyed.”

“It has been the honor of my lifetime to be your commander-in-chief,” he said to thunderous applause.

Obama warned, “Democracy can buckle when we give in to fear.”

“So just as we, as citizens, must remain vigilant against external aggression, we must guard against a weakening of the values that make us who we are. That’s why, for the past eight years, I’ve worked to put the fight against terrorism on a firm legal footing. That’s why we’ve ended torture, worked to close Gitmo, and reform our laws governing surveillance to protect privacy and civil liberties. That’s why I reject discrimination against Muslim Americans,” he said.

“Let’s be vigilant but not afraid,” he said.

Obama ended his speech urging for unity: “Our democracy is threatened whenever we take it for granted. All of us, regardless of party, should throw ourselves into the task of rebuilding our democratic institutions.”

The president then gave a shout out to Vice President Joe Biden, his wife, Michelle, as well as his two daughters. “Malia and Sasha, under the strangest of circumstances, you have become two amazing young women, you are smart and you are beautiful, but more importantly, kind and thoughtful and full of passion,” he said. “You wore the burden of years in the spotlight so easily. Of all that I’ve done in my life, I’m most proud to be your dad.”

Obama ended his speech with a promise.

“My fellow Americans, it has been the honor of my life to serve you. I won’t stop; in fact, I will be right there with you, as a citizen, for all my days that remain,” Obama said. “For now, whether you’re young or young at heart, I do have one final ask of you as your president — the same thing I asked when you took a chance on me eight years ago.”

Obama ended his address with the words that first got him elected: