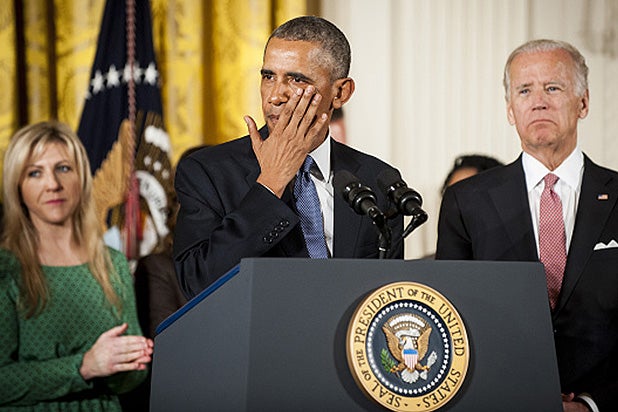 On the same night that he held a town hall meeting on gun control in Virginia that aired on CNN, President Barack Obama’s op-ed on the issue was published on the New York Times website Thursday.

Rather than aiming his message at Conservatives, the POTUS sent a direct warning to Democratic presidential candidates saying he will not offer them his support unless they are in favor of gun control.

sense gun safety and who feel that their views are not being properly represented, to stand with us and demand that leaders heed the voices of the people they are supposed to represent,” Obama continued.

On Tuesday, Hillary Clinton responded to Obama’s executive actions on gun control via Twitter, saying: “Thank you, @POTUS, for taking a crucial step forward on gun violence. Our next president has to build on that progress — not rip it away.”

“2016 should be remembered as the year America decided to take on gun violence,” she wrote in another tweet on Thursday.

“It’s become clear that no mass shooting, no matter how big or bloody, will inspire Republicans to put children and innocent Americans over the interests of the NRA. They are simply more loyal to gun lobbyists than our children,” Sanders said. “That’s why I support President Obama’s executive actions to make our communities safer.”

Obama also shared some shocking statistics in his New York Times piece, writing: “Every year, more than 30,000 Americans have their lives cut short by guns. Suicides. Domestic violence. Gang shootouts. Accidents. Hundreds of thousands of Americans have lost brothers and sisters, or buried their own children. We’re the only advanced nation on earth that sees this kind of mass violence with this frequency,” he said.

However, he admitted that turning the tide won’t happen during his presidency. “Change will be hard. It won’t happen overnight,” Obama said.

The president ended his op-ed by comparing the fight to end gun violence to the suffragette movement, civil rights, LGBT rights and equal marriage.

“Those moments represent American democracy, and the American people, at our best. Meeting this crisis of gun violence will require the same relentless focus, over many years, at every level,” he said. “If we can meet this moment with that same audacity, we will achieve the change we seek. And we will leave a stronger, safer country to our children.”