Legendary musician and the inventor of an iconic line of solid-body electric guitars Les Paul has died of complications from pneumonia. He was 94.

Paul played guitar with some of his generation's preeminent musicians, including Louis Armstrong and Bing Crosby. He also invented multitrack recording, which allows artists to record multiple instruments and voice parts at different times. 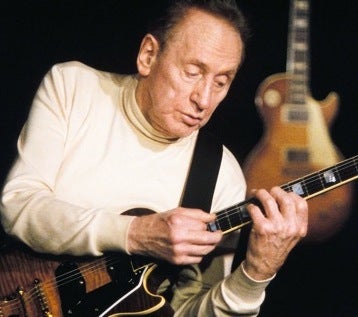 With his second wife Mary Ford on vocals — some of them multitracked up to 75 times — and Paul's guitar electronically speeded up, he recorded a string of '50s hits like "Mockingbird Hill" and "How High the Moon." The couple, who also had a television show, "Les Paul and Mary Ford at Home," divorced in 1964.

In recent years, Paul suffered badly from arthritis and could barely move his fingers — until he picked up his guitar, when his legendary speedy picking would barely seem affected. And despite the pain, until his death he was still playing regular Monday night shows at New York's Iridium nightclub, where musicians like Dire Straits' Mark Knopfler, Bruce Springsteen and Eddie Van Halen would often drop in and play with him.

"These fingers are all shot," Paul once said. "They just don't move. This hand's the same way. He moves there … but he don't move there."

Paul tinkered with guitar amplification until 1941, when he created a four-by-four piece of wood strung with steel strings which he called "The Log." In 1952, Gibson Guitars started producing guitars in his name. Still a staple of blues and rock 'n' roll, the Gibson Les Paul has been used by the likes of Eric Clapton, Led Zeppelin's Jimmy Page, Pete Townsend of the Who and jazz musician Al DiMeola.

The electric guitar became exceedingly popular in the mid-to-late 1940s and mid-'50s.

"Suddenly, it was recognized that power was a very important part of music," Paul once said. "To have the dynamics, to have the way of expressing yourself beyond the normal limits of an unamplified instrument, was incredible. Today a guy wouldn't think of singing a song on a stage without a microphone and a sound system."

Paul retired from music in the late 1960s to focus on his inventions, but later partnered with country musician Chet Atkins in the mid-'70s for two albums. The pair won a Grammy for best country instrumental performance of 1976 for the "Chester and Lester" album.

Paul was inducted into the National Inventors Hall of Fame in 2005.

He was born Lester William Polfus, in Waukseha, Wis., on June 9, 1915. His childhood piano teacher wrote to his mother, "Your boy, Lester, will never learn music," according to the New York Times. Despite the harsh words, Paul went on to play harmonica, guitar and banjo as a teenager and played with a number of country bands in the Midwest.

When his musical career began, he went by the name 'Red Hot Red' or 'Rhubarb Red.' He moved to New York to form the Les Paul Trio in the mid-1930s with Jim Atkins and bassist Ernie Newton.

But his experimentation with audio amplification began at a mere 13, when he placed a telephone receiver under the strings of his acoustic guitar. When that didn't make enough volume, he put a phonograph needle in the guitar to amplify all six strings.

After Bing Crosby gave him a tape recorder, he added an additional playback head to the recorder to create a delayed effect called a tape echo, which gave recordings a more raw, live feel. Crosby later urged Paul to launch his own recording studio, which he did in Los Angeles, where he toyed with recording techniques, the texture of instruments and reverberation.

He later put eight mono tape machines together and sent their outputs to a single piece of tape with the recording heads on top of each other. That machine later became the multitrack recorder.

Many believed Paul had been working on another big musical invention during his last years, but the truth of the rumor was never revealed.

"Honestly, I never strove to be an Edison," he told the Times in 1991. “The only reason I invented these things was because I didn’t have them and neither did anyone else. I had no choice, really.”

Paul is survived by three sons, Gene, Russell and Robert, and a daughter, Colleen.